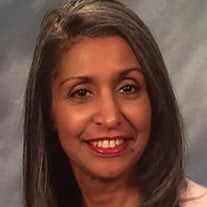 In Loving Memory of Yvonne Thelmonica Levelle Sunrise December 18, 1942 Sunset September 26, 2020 Yvonne Levelle, age 77, of Atlanta Georgia, formerly of New York City, New York, passed away peacefully, at Peachtree Creek Memory Care on Saturday September 26, 2020. A Memorial Service will be held in honor of Yvonne at 2:00pm on Saturday October 3, 2020, in the Chapel at West Cobb Funeral Home and Crematory in Marietta, Georgia with Christopher King Officiating. Yvonne Thelmonica Levelle was born to Granville Oliver and Mayme Levell on December 18, 1942. Raised as an only child in the Riverton area of Harlem, New York. Yvonne was a precocious young girl, always asked questions. That curiosity led her to developing a strong interest in reading and writing, resulting in a Bachelors of Arts in English from California State University, Hayward and a Masters Degree in Speech and Rhetoric, from the University of California, Berkeley. Yvonne loved horseback riding. She once fell from a horse and bumped her head. She didn’t share this with her mother because Yvonne feared her mom would not let her ride anymore. At the age of 15 she met the love of her life at a friend’s Sweet Sixteen Party. His name was Richard Kier, a dapper 17-year-old nationally ranked track star. After four years of dating the two of them married and moved to the West Coast to settle in California where she gave birth to her older son, Richard in 1964. Yvonne was an outspoken advocate of civil rights and social equality. She once sued a landlord for housing discrimination in the late 1960s. In 1971 Yvonne and Richard decided to move back to the East Coast. They settled in Rochester, New York, where their younger son Roland was born in 1972. While in Rochester, Yvonne worked for Eastman Kodak and was the first African American to be published and portrayed at Kodak Headquarters. Yvonne served as a Liaison for the Marketing & Communication Division of Eastman-Kodak. Yvonne was an avid traveler, some of the countries she visited included France, England, Canada, Mexico, Italy, Morocco, Spain, Switzerland and Jamaica She lived in several cities, including Rochester, New York; Westport, Connecticut; Teaneck, New Jersey; and New Orleans, Louisiana. She settled here, in Atlanta twenty-one years ago. Prior to retirement, Yvonne worked as Assistant Director of EEOC and Compliance for Emory University. Yvonne was preceded in death by her parents Granville Oliver and Mayme Levell. She leaves behind her son Richard Kier and his wife Linda of Brambleton, VA and her son Roland Kier and his wife Lisa of Sandy Springs, GA; grandsons Gabriel and Elijah Kier; her aunt Juanita and her husband Edward Villani of Hiram, GA; along with a host of cousins and friends. We will miss you dear Yvonne. We are blessed because you were a part of our lives. We will always remember and thrive on what you poured into us--your love, your compassion, comfort and encouragement. We will always carry cherished memories of you in our hearts. With joy in our hearts we say - God bless you and rest in peace until we all rise together in glory.

The family of Yvonne Levelle created this Life Tributes page to make it easy to share your memories.

Send flowers to the Levelle family.