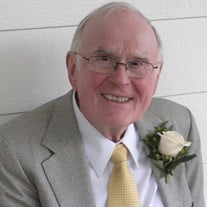 William Arthur Seiter, age 90, of Roswell, Georgia passed away peacefully at Tranquility Hospice on Tuesday. August 3, 2021. William is preceded in death by his parents, Chauncey and Christine Seiter as well as brother, Richard Seiter. He was born 6/5/1931. He was raised in Barberton, Ohio. He attended Kent State University and obtained his Bachelor's Degree. During his high school and college years he worked with a construction crew building houses to support his family. After college Willie had a fruitful career in sales at American Seating and Spinnerin Yarn, while thoroughly enjoying his travels all across America. Later in life he met Kathleen Donaldson and her three boys. He fell in love with them all. After asking the boys' permission, he and Kathy married and enjoyed traveling as a family in his motorhome, going to Browns games and attending numerous sporting events in support of the boys. In just a short few years their family was complete after the birth of their daughter, Jennifer. She was his pride and joy! Challenges with the Ohio economy brought Willie and family to Georgia, where he was able to rely upon his early experience in home building - starting Seiter and Sons Construction Company. Willie and Kathy built many homes throughout Cobb County (and beyond), making great memories along the way, and a very visible, positive impact on the community. Survivors include: Wife: Kathleen Seiter, Daughter: Jennifer (Quincy) Acklen. Three stepsons: Mark (Michele) Lafont, Gerry (Cindy) Lafont, Mike (Laura) Lafont. Eight Grandchildren: Brian, Joshua, and Isabel Acklen, Katie (Matthew) Hopkins, Matthew (Alyssa) Lafont, Kelsie Lafont, Logan Lafont and Leah Lafont. Three great grandchildren: Claire and Easton Hopkins and Landon Lafont. The family held a private "Celebration of Life" at the home of his daughter. The afternoon was spent eating his favorite foods, watching videos of family and sharing "Willie" stories. He will be greatly missed!

William Arthur Seiter, age 90, of Roswell, Georgia passed away peacefully at Tranquility Hospice on Tuesday. August 3, 2021. William is preceded in death by his parents, Chauncey and Christine Seiter as well as brother, Richard Seiter. He was... View Obituary & Service Information

The family of William Arthur Seiter created this Life Tributes page to make it easy to share your memories.

Send flowers to the Seiter family.