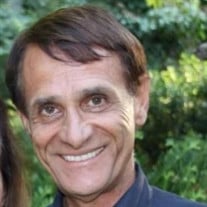 Vito R. Casella passed away unexpectedly on February 21, 2021, in Atlanta, Georgia, at the age of 76. He was not ready to leave those whom he loved, nor were they ready to lose such a special man. Several times a week Vito would remark to his wife, June, “I just love my life, I could not be happier. We are so blessed.” Vito was born on July 27, 1944, in Old Forge, Pennsylvania, to Vito and Josephine Orlosky Casella. As his name suggests, Vito was half Italian on his father’s side, and one of his great joys was visiting Felitto, Italy, the town where his family originated, in 2015. Even after becoming vegan in later years, he always remembered the pizza he had while growing up in Old Forge as the best in the world. Vito had also been researching his mother’s Slavic heritage with his wife, June, and they had planned a trip to Budapest, Hungary, and the Slavic countries this year. Vito graduated from Mansfield State College in 1967 with a degree in chemistry. He continued his education with a master’s in chemistry from Drexel University in 1971 and a Ph.D. in chemistry from the University of Wyoming in 1974. His accomplishments in higher education and career brought great pride to his family, and any mail his mother sent him was always addressed to “Dr. Vito Casella.” He married Diane Counts Anderson, his wife of 22 years, in 1971 and had two daughters. His eldest, Shara, was born in Los Alamos, New Mexico, in 1974, as he finished his thesis research. His younger daughter, Lindsay, was born in Dayton, Ohio, in 1977. As Vito established his career as a nuclear chemist, he worked in Long Island, New York; Dayton, Ohio and Aiken, South Carolina, retiring in 2009 after working for the U.S Department of Energy at the Savannah River Site. He loved helping his daughters with all their school science projects, complex math problems and even explaining the science of thunderstorms when they were scared at night and got into bed with their parents. Shara and Lindsay remember their father as a man who was always there for them when they needed him. He attended every play, concert, game and school event without fail. When Lindsay was a theatre major at Ohio State, her dad would drive up from Georgia to Ohio for every play, even if she didn’t have any lines. He took his daughters on trips they’ll never forget, including ones to Italy, France and Greece and gave them away at their weddings. He was excited to have another girl in his life when his granddaughter, Celia, was born in 2016. Every card was signed “All My Love, Dad,” and he showed his love with his hugs, his words, his presence and his smile. His daughters are grateful he was their “Daddy” and are sad Celia will not grow up with her grandfather’s presence. They vow to maintain his legacy of kindness, empathy, love and support when raising her. Vito and June met ballroom dancing and fell in love with each other within months. They married on December 27, 2008. The couple shared a passion for dancing and enjoyed socializing with their dance friends several times a week. They loved winning prizes at the Halloween parties and had the pleasure of performing together in a few dance exhibitions. Vito lived an active life and enjoyed many activities with June. After he retired, they became obsessed with traveling to far-off lands and traversed six continents together. They enveloped themselves in ancient cultures and adventures through their world travels. They swam with sharks, stingrays, and porpoises; had wild monkeys sitting on their heads; supported falcons perched on their arms; hugged koala bears; rode camels; and last year walked “hand in trunk” with elephants in South Africa. They swam in the Blue Lagoon in Iceland, climbed the Sydney Harbor Bridge above bustling traffic, and hung off a 629-foot skyscraper in New Zealand. June will miss these wonderful adventures and the blessed life that they shared together. Outside of his family, Vito’s biggest passion was Penn State football. Starting each football season, he studied recruiting classes and rosters so he knew each player’s name and position before the games started. He watched every game, rooting on the Nittany Lions. His daughters treated him to his first Penn State football game for his 60th birthday, and they will never forget seeing their dad so happy on that beautiful day at the stadium. Vito’s competitive spirit came out when playing games, as he enjoyed the challenge of finding the best strategy to win. He taught his daughters how to play cards and enjoyed sitting down each evening with June to play Sagrada and/or Phase 10. Attending church was always vital to Vito, even as a young boy. He joined the Episcopal Church in 1976, was an original member of the St. Francis Episcopal Church in Springboro, Ohio, and was active in churches in Aiken, South Carolina, and Atlanta, Georgia. Vito became a member of the Church of Jesus Christ of Latter-day Saints in 2018, and soon became an Elder. He was endowed in the temple on October 23, 2019. He diligently volunteered in his church and community and most recently shared a calling with June to serve several non-profit organizations. He was also a JustServe Administrator in Church Public Communications. Vito is survived by his wife, June Casella, his two daughters and sons-in-law, Shara and Adam Scheibe of Chicago, Illinois; Lindsay and Robert Nearing of Marietta, Georgia; one granddaughter, Celia Nearing; his sister, Gloria Casella of Dover, Delaware; one niece and two nephews. He is preceded in death by his parents; his brother, Frank Casella; and his sister, Audrey Sienkiewicz. A memorial service will be held at The Church of Jesus of Christ of Latter-day Saints at 95 Holt Road, Marietta, Georgia, on March 13, 2021, at 1 p.m. ET. Masks and social distancing are requested. If in-person attendance is not possible, please join via the below Zoom link: https://us04web.zoom.us/j/6977306532?pwd=a3d5cWVOMkEwcVdPYW9JcXNjVFBLdz09" https://us04web.zoom.us/j/6977306532?pwd=a3d5cWVOMkEwcVdPYW9JcXNjVFBLdz09

Vito R. Casella passed away unexpectedly on February 21, 2021, in Atlanta, Georgia, at the age of 76. He was not ready to leave those whom he loved, nor were they ready to lose such a special man. Several times a week Vito would remark to his... View Obituary & Service Information

The family of Vito R Casella created this Life Tributes page to make it easy to share your memories.

Send flowers to the Casella family.