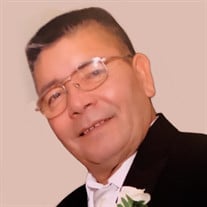 On Saturday, September 5th, 2020, Victor Manuel Munoz “Don Pilo,” loving husband and father of six children passed away at the age of 73. Victor was born on October 12th, 1946 in Ciudad Juárez, Chihuahua, Mexico. He was a member of the Cartilla Militar from 1964-1966 and most known as a contractor and local businessman for his entire adult life. On December 14, 1966 Victor married Maria del Socorro Caldera. They raised six children, Laura Elena, Marina, Victor Manuel Jr., Ramon, Julianna, and Edgar Victor had a passion for life, music, the arts, and all forms of culture. He lived to explore and marched to the beat of his own drum. He had a smile bright enough to light a room and a laugh loud enough to fill your heart. Don Pilo was a modern day renaissance man. There was never a project he could not manage, a puzzle he could not solve, or an instrument he could not play. A man who never stopped surprising you with things he could do. Don Pilo valued relationships and experiences over any material thing. He was a free spirit who never stopped being curious and living life to the fullest. Victor was preceded in death by his father, Ramon Munoz and his sister, Bertha Munoz. He is survived by his mother Elena Guerrero de Munoz, his siblings, Guadalupe, Rosario, Enrique, Gerardo, and Cesar, his wife, Maria, his daughters, Laura Elena, Marina, and Julianna, and his sons, Victor Manuel Jr., Ramon, and Edgar. A life full of so much happiness is incomplete without acknowledging Don Pilo’s fifteen grandchildren and 7 great grandchildren.

The family of Victor Manuel Munoz created this Life Tributes page to make it easy to share your memories.

Send flowers to the Munoz family.