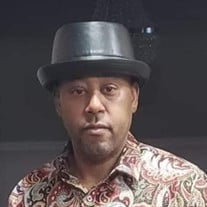 Vicente Arthur Donastorg II, affectionally known as “Green Bay” by many, was born on December 31, 1971, in the beautiful island of St. Thomas, U.S. Virgin Islands, to Janice and Vicente Donastorg . Vicente attended Montessori, All Saints and E. Benjamin Oliver Elementary schools in St. Thomas, V.I. Moving on to high school, he attended the Ivanna Eudora Kean High School, and graduated in the class of 1989. Upon the completion of high school, he relocated to Georgia, where he matriculated to Morris Brown College. He acquired his Associate’s degree in Legal Assistant/Paralegal from Atlanta Technical College. As a child, Vicente joined the Boy Scouts of America, and went on to become an Eagle Scout. He was a member of the Upsilon Chi Chapter of Alpha Phi Omega Fraternity. Vicente Donastorg II was a Master Mason in the Joshua Lodge No.1, working under the Most Worshipful Mount Mariah Grant Lodge A.F. & A.M. He was previously a member of different bike clubs. Vicente went on to become a Rigger, a job he loved passionately for over 20 years. He met numerous friends on this journey and mentored a few. He was a Rigger up until his untimely passing. Vicente, is survived by and will be sadly missed by his mother, Janice Donastorg, his sons, Vicente III and Sayveon Donastorg; his sister Juana Donastorg-Isaac; brothers-in-law, Patrick Isaac and Thomas Hop-Wah (Kandis); his nieces and nephews, Shanae Hop-Wah Poehner (Lindsey), Thomas T. Hop-Wah, Chrystalia Isaac, and Jaliyah Hop-Wah; his great nephew, Marcus Wise; and great niece, Sarai Joseph. He’s also survived by his aunts, Leomae Good, Judy White, Tesla D. Plaskett, Felicita Donastorg, Deloris Bagley, Kim Donastorg and Lisa Donastorg; uncles, Stanley Bagley (Ruth), and Betorino Duran. He’ll be missed by his special friends, Jeanette Rhymer, Perry Tyson, Marvin Jackson, Hassan Saldeen, and Kevin Bookman; and many cousins, family and friends to numerous to mention. Vicente is preceded in death by his father Vicente A. Donastorg, his paternal and maternal grandparents, and his favorite cousin/big brother, Deane H. Good. May his soul rest in eternal peace.

The family of Vicente Arthur Donastorg II created this Life Tributes page to make it easy to share your memories.

Send flowers to the Donastorg family.