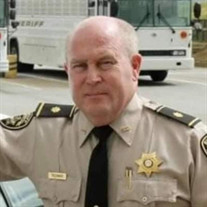 Retired Major Thomas J. O'Connor, III, age 67, of Powder Springs, Georgia passed away Sunday, July 11, 2021. Funeral Services will be held at 11:00 am on Friday, July 16, 2021 at Due West United Methodist Church in Marietta with Rev. Lathem Postell officiating. Interment will follow at 1:30pm at the Georgia National Cemetery in Canton, Georgia. He will lie in state at the church 1 hour prior to the ceremony. A native of New Jersey, Mr. O'Connor moved to Cobb County in 1977. He was a veteran of the United States Marine Corp, having served for 3 years. He retired as a Major with the Cobb County Sheriff's Office after a 31 year career in law enforcement. Mr. O'Connor was instrumental in starting the Honor Guard Program at the C.C.S.O. He also loved coaching football and was involved with the Due West Football Program and the Harrison High School Football Booster Club. He was also a longtime member of Due West United Methodist Church. He was preceded in death by his wife, Elizabeth Ann O'Connor, in 2017. Survivors include: Daughter, Courtney Cole, Powder Springs, GA; Son, Jason (Brandi) O'Connor, Dallas, GA; 4 Siblings, Edward (Trish) O'Connor, Santa Cruz, CA, and Marianne McDermott, Noreen Bunner, and Don (Cindy) O'Connor, all of New Jersey; Granddaughter, Madison Cole; Step Grandson, Avery Gloyd.. In lieu of flowers, donations may be made in Tom O'Connor's memory to any Leukemia Research Foundations such as: https://givenow.lls.org/give/342076/#!/donation/checkout or https://www.clf4kids.org/donate.php. The family will receive friends on Thursday, July 15, 2021 from 5:00 pm until 8:00 pm at West Cobb Funeral Home and Crematory in Marietta. Online guest book at www.westcobbfuneralhome.com.

The family of Ret. Major Thomas J. O'Connor III created this Life Tributes page to make it easy to share your memories.

Send flowers to the O'Connor family.