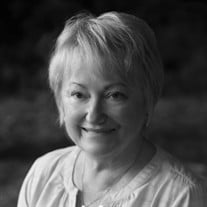 Sue Anne Davison Bowen, age 73, of Marietta, Georgia passed away July 3, 2021 after a 12 year ordeal with breast cancer. A Private Memorial Service will be held Tuesday, July 6, 2021 at West Cobb Funeral Home and Crematory Chapel in Marietta, Georgia with Rev. Julie Boone officiating. A video of the service will be available after 2:00 pm Tuesday, July 6, 2021 on Mrs. Bowen web page at westcobbfuneralhome.com. She was born in Atlanta, GA in 1947 and raised in the Grove Park community by her parents the late Garth and Helen Davison. There her spiritual journey as a life-long Methodist began at Bethany Methodist Church, which also later relocated to Cobb County. Anne attended West Fulton High School through the 11th grade where she was an honor student, cheerleader and active in student government. After her family moved to North Atlanta, Anne graduated from Sandy Springs High School in 1965. She then attended Oglethorpe University for one year where she was a varsity cheerleader for the Oglethorpe University basketball team. Leaving Oglethorpe, she married Sterling Bowen in 1966, her beloved husband for over 53 years. They then began their married life by settling in the Smyrna area of Cobb County. After marriage, Anne worked as a full time legal secretary for 6 years until giving birth to the first of their 3 children, Chip (Sterling Jr.), Ashley and Patricia (Pat). During this time she was quite active in her church, community and subdivision. She was a longtime member and served a term as President of the Bennett Woods Garden Club. She also served as captain of her ALTA tennis team. But, outside of her family, she devoted most of her time to her church activities at Bethany and her Friendship Circle. In the summers of 1981, 84 and 86 the family took month long trips visiting the National Parks in our western states, which was an invaluable learning experience for the kids and their parents. The family also tent camped all over Georgia. During these years Anne was involved in her children's education, sports activities, scouts and social events. She was their greatest supporter. A real "Super Mom"! After her youngest reached middle school Anne became a para-pro at Griffin Middle School and decided to return college and complete her degree. She did so by attending evening classes at Kennesaw State University and obtained a Bachelor's degree in Education. She then began her 20 year teaching career at Awtrey Middle School. During her time at Awtrey she was recognized as the 1999-2000 Teacher of the Year. She also returned to KSU to earn a Master's degree in Education. Her relationship with KSU included bringing KSU student teachers into her classes. She contributed a chapter on middle school education to a book being compiled at KSU by Dr. Marj Economopoulis, Dean of KSU's middle grades education. Because of Anne's close association with the university she was asked to sit on KSU's middle school advisory board, which she did for 10 years, being selected as the Advisory Board Member of the Year for the entire University in 2004. After retiring from Cobb County, Anne also supervised KSU student teachers in the field. When the family moved to West Cobb, Anne began attending Due West UMC. There she participated in her Sunday School class and in making quilts for cancer patients with the "Stitching Sallies". Subsequently Anne began worshiping at Marietta First UMC. Anne might best be remembered for her unselfish dedication to her friends, and anyone she met who was in need. There were always cards in the mail going out to friends with an appropriately uplifting message of support. Also there were casseroles, vegetables from her garden, cakes, pies and jars of jelly which she provided to friends to help lift their spirits. She was a kind and caring soul with a heart for those in need. In retirement she was active at the West Cobb Senior Center where she played bridge, mahjong and generated many new friendships. She also enjoyed playing cards and dominoes with her friends. Anne is survived by her husband, Sterling and their 3 children, Chip (Jessica) Bowen, Ashley Bowen (Chris) Corner and Pat Bowen, as well as by their granddaughter-of-the-heart, Haley Southey. She is also survived by her 3 siblings, Steve Davison, Donna Davison (Travis) Carter and Karen Davison Hamilton, and numerous nieces and nephews and their children. Anne, like her father, was also a faithful supporter of MUST Ministries. She and her siblings often cooked and volunteered at MUST. She was a wonderful person who we will all miss tremendously. Near the end she stated that she was satisfied with her life. Although she had no monuments built in her honor, she had touched a lot of lives. In her classroom, in her garden and in her life, "She planted a lot of seeds". In lieu of flowers, the family requests that donations be made in Anne Bowen's memory to MUST Ministries, P.O. Box 1717, Marietta, GA 30061. Online guest book at www.westcobbfuneralhome.com.

The family of Sue Anne Davison Bowen created this Life Tributes page to make it easy to share your memories.

Send flowers to the Bowen family.