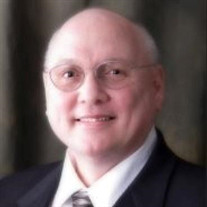 Stephen Lee George, age 69, of Marietta, Georgia passed away Friday, December 31, 2021. A Visitation will be held on Saturday, January 29, 2022 at Living Stone Church in Marietta, from 11:00 to 12:00 followed by a Memorial Service from 12:00 to 1:00 with Pastor Grant Cole officiating. Stephen "Steve" Lee George went to be with the Lord on Friday, December 31, 2021. From a young age Steve devoted his life to serving by attending West Point, joining the Navy, fighting for his country during the Vietnam War, and dedicating his life to the Lord. As a passionate prayer warrior his mission was to love and pray for others and he used his talents to do just that. He served various church ministries through praying, teaching and leading. He most enjoyed teaching, at the college where he worked, and in his church. He was a published author and accomplished writer, often writing his own curricular. His fervor for the Lord and church will be greatly missed. Steve was preceded in death by his parents, Phillis and Gene, his sister, Clarissa Ann, and his daughter Bonnie Faith. He is survived by his wife, Una, his daughters Sarah, Ruth, Christina and Ariel, his sons Tom, Stephen Daniel, John and eleven grandchildren. In lieu of flowers, donations may be made in Stephen George's memory to the American Kidney Foundation. Online guest book at www.westcobbfuneralhome.com.

The family of Stephen George created this Life Tributes page to make it easy to share your memories.

Send flowers to the George family.