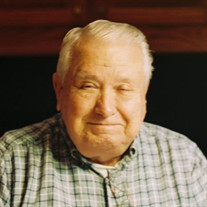 Sidney R. Hall went to sleep January 8, 2021 from complications of Covid-19. He was 83 years old. Born in Glorieta, New Mexico. His family moved to Susanville California via Starbuck Washington where his brother was born. When Sid was 12 the family moved to West Fork, Arkansas, where he remained until joining the military. Sid served his country in the United States Air Force, eventually stationed at Dobbins AFB. Sid met his wife Janice Benson in front of the Strand Theatre in Marietta. They spent 55 years together until Janice's Death in January of 2017. He (SR Hall) worked at Yancey Brothers in Mableton, Georgia for 46 years until he retired in 2008. He was known as an honest, gentle, witty, and humble man to all. He enjoyed a simple life and spent a lot of time with many loving friends. As Joe Everette would say: "There will never be another one like him and there isn't anyone that can imitate him.” No one could tell a story like Sid. His sense of humor and contagious belly laughs while telling stories from his life will live long in our memories. The memory of his unconditional love and the nicknames he called all of us like twinkle toes, booger, string bean, and shug will always bring warm feelings and a smile to our faces. Preceding Sid in death was his father Robert M. Hall, mother Carol E. Hall, and brother Wesley V. Hall. Sid was a 5th Great Grandson of Richard Fields, Jr., a Chief, leader, and diplomat of the Texas / Oklahoma band of the Cherokee nation.. Surviving Sid is his son Dick and Angélica Hall, daughter Jami Christopher, as well as six grandchildren, Bambi and Lee Hackney, Candace and David Owens, Travis and Kristi Morris, Jeromy Morris, Steven Pritchard, Dillon Christopher, and Ivy Nix. He had nine Great Grandchildren and One Great-Great Granddaughter.

Sidney R. Hall went to sleep January 8, 2021 from complications of Covid-19. He was 83 years old. Born in Glorieta, New Mexico. His family moved to Susanville California via Starbuck Washington where his brother was born. When Sid was 12 the... View Obituary & Service Information

The family of Sidney R. Hall created this Life Tributes page to make it easy to share your memories.

Send flowers to the Hall family.