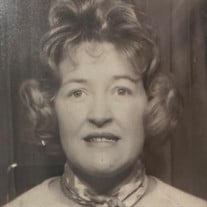 Shirley Olive Sharpling Taylor, age 84, of Dallas, Georgia passed away Tuesday, February 23, 2021. Mrs. Taylor was born in London, England, in February of 1936 in the middle of a world reeling from warfare and depression. She brought peace and joy to everything and everyone she touched. Shirley then survived an even greater war in the confines of a bomb shelter as good versus evil battled in the skies above her. Shirley loved her family deeply and told stories of her father, mother, brothers, and sisters. She fell in love with an American serviceman and made the ultimate sacrifice to leave her beloved country and family to raise her own in the United States. Shirley then sacrificed daily to ensure all of her children and grandchildren were loved and wanted for nothing. She was passionate and vocal and held a deep devotion to faith and God. Shirley believed all people were equal in the eyes of God and that the poor were not liabilities but opportunities for us to do good in this world. She lived her life by enjoying God's creation through traveling, painting, reading, writing, and raising generations of children. Shirley was a wife, mother, spiritualist, mentor, friend, and advocate. Despite many health challenges throughout her life, Shirley persevered to spread love and joy to the world and everything she touched. She's survived by a sister, brother, daughters, sons, grandchildren, and great-grandchildren. God has called back his angel so she can finally be at peace. There's a Sharpling Tea Party in heaven full of stories and laughter. Rest in peace, Shirley (Also known to everyone as Nanny). We will never forget you. Thanks for the love and the memories that took our breaths away.

Shirley Olive Sharpling Taylor, age 84, of Dallas, Georgia passed away Tuesday, February 23, 2021. Mrs. Taylor was born in London, England, in February of 1936 in the middle of a world reeling from warfare and depression. She brought peace... View Obituary & Service Information

The family of Shirley Olive Taylor created this Life Tributes page to make it easy to share your memories.