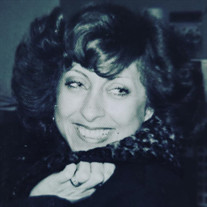 Sheila Kivette Giddens, age 75, of Marietta, Georgia passed away May 31, 2021. Memorial Service will be held at 11:00 am on Monday, July 12, 2021 at West Cobb Funeral Home and Crematory Chapel in Marietta, GA. Interment will follow at 2:30 pm at Georgia National Cemetery in Canton, Georgia. Sheila Kivette Giddens passed away peacefully after fighting a battle with dementia in her home that she shared with her husband Winfred “Wink” Giddens on Monday, May 31, 2021 in the early morning. She was 75 years old. Sheila was born in Alabama on March 7, 1946. In 1964, she married the love of her life on July 18 in Childersburg, Alabama. Her husband, Wink, was stationed at Kessler Air Force Base where she became an Air Force wife. Next, the couple moved to Patrick Air Force Base where she was a member of the Officer’s Wives Club as the Countdown photographer and the news/media correspondent for the wives’ club. Moreover, she attended Alexander City Junior College for a couple of years. The couple moved to North Carolina where was their next placement as well as starting their family there. After North Carolina, she had opportunities to live in Connecticut, Tennessee and Georgia. She became a known artist in Georgia after having taken various classes and workshops to refine her craft. She served in several artist organizations. For example, she served in the South Cobb Artists’ Alliance for over 32 years serving as the curator for 22 years where she had over 108 art exhibits shown. She loved her husband, family, her pets, art and traveling especially Europe precisely the South of France. She was a member of the “Light of Hope” Presbyterian Church. She is preceded in death by her father, John Joel Kivette, Jr. Her family is as follows: her husband of 56 years 10 months 2 weeks, Wink Giddens, her daughter, Danni and son-in-law, John, her mother, Robbie E. Kivette, her brother and his wife, 8 nephews, 1 niece and several great nieces and nephews as well as 15 grand-pets. In lieu of flowers, please donate to the ongoing medical research for dementia or a charitable organization of your choice. The family will receive friends on Monday, July 12, 2021 from 10:00 am until 11:00 am at West Cobb Funeral Home and Crematory in Marietta, GA. Online guest book at www.westcobbfuneralhome.com.

Sheila Kivette Giddens, age 75, of Marietta, Georgia passed away May 31, 2021. Memorial Service will be held at 11:00 am on Monday, July 12, 2021 at West Cobb Funeral Home and Crematory Chapel in Marietta, GA. Interment will follow at 2:30 pm... View Obituary & Service Information

The family of Sheila Kivette Giddens created this Life Tributes page to make it easy to share your memories.

Send flowers to the Giddens family.