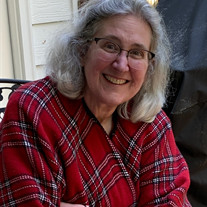 Robin S. Gruner passed away peacefully on May 5th, 2022 with her husband and sister by her side. She was a devoted wife, mother, sister, aunt, and earlier this year, became a grandmother (GranGran). Robin Elaine Scheeffer was born on September 25, 1959 in Indianapolis, Indiana to Janet and Robert Scheeffer. She graduated from Crispus Attucks High School in 1977. While growing up, Robin became an avid reader which led her to earn a Bachelor's degree in English from Indianapolis University Purdue University of Indianapolis in 1982. Then she attended Indiana University (IU) and earned a Masters of Library Science degree in 1983. After graduating from IU, she was the LSCA Fiscal Coordinator at the Indiana State Library in Indianapolis. While at IU, Robin met Mark Harriss Gruner. They married on November 2nd, 1985 and moved to Dallas, Texas. They were married over 36 years before her passing. In Texas, Robin was head of Government Documents at Fondren Library at Southern Methodist University (SMU). They moved to Plano, Texas in 1988 where their son David (1991), and daughter Amanda (1996) were born. She continued working at SMU until the family moved to Acworth, Georgia in February 1998, in part to be closer to family. In Acworth, Robin became a Home Manager where she volunteered at the kids' elementary school and kept everything running smoothly. Robin was a wonderful mom to her children. She was always supportive of their hobbies and goals. She was also a wonderful dog mom to Coco and Jack. She was an avid reader and preferred mystery novels. Robin was even downloading new titles while in the hospital. If she did not want to be interrupted, she could give a glare like no other. She also used her research skills to help family and friends and always stressed using "proper" sources for research. She developed an interest in genealogy and has traced both the Scheeffer and Gruner families back many generations. Prior to her passing, Robin's most important goals were to spend time with her first grandchild and see videos/pictures of Amanda's wedding. Happily, she was able to accomplish both goals before passing. Robin is survived by her husband Mark, her son David and his fiancé Kelsey Reese (parents of grandson Jameson), daughter Amanda and her husband Britt Phillips, her sister Elizebeth Schura (husband Mike and son Kyle), her brother Michael Scheeffer (wife Rebecca, and their children Meagan, Emily, and Robert), mother-in-law Marsha, and sister-in-law Valerie. She was preceded in death by her mother Janet (2007), father Robert (2009), father-in-law Charles (2015), and niece Katherine Schura (2019). The family will receive friends and family at West Cobb Funeral Home from 5pm to 7:30pm on Thursday May 12th. In lieu of flowers, please donate to the American Lung Association, the Indiana Historical Society, or a charity of your choosing. Online guest book at www.westcobbfuneralhome.com.

Robin S. Gruner passed away peacefully on May 5th, 2022 with her husband and sister by her side. She was a devoted wife, mother, sister, aunt, and earlier this year, became a grandmother (GranGran). Robin Elaine Scheeffer was born on September... View Obituary & Service Information

The family of Robin Elaine Gruner created this Life Tributes page to make it easy to share your memories.

Send flowers to the Gruner family.