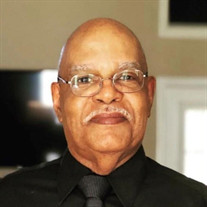 Robert Lee Sturgies, Sr. age 75, of Marietta, Georgia passed away Friday, April 3, 2020. The family will inter him Wednesday, April 15, 2020 at Georgia National Cemetery in Canton. Mr. Sturgies served in the US Military as a First Sergeant... View Obituary & Service Information

The family of Robert Sturgies Sr. created this Life Tributes page to make it easy to share your memories.

Send flowers to the Sturgies family.