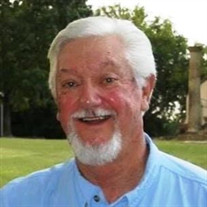 Robert “Bobby” Samuel Solomon passed away at his home on Saturday, March 27, 2021. A Private Funeral Service will be held Wednesday, March 31, 2021 at West Cobb Funeral Home and Crematory in Marietta, GA with Rev. Robert L. Helms, Jr. officiating. Interment will follow at Cheatham Hill Memorial Park in Marietta, Georgia. Bobby was 80 years old. Originally from Concord NC, Bobby and his family moved to Cobb County, GA in August 1972. In the Spring of 1973, the Solomon family moved into the same house in which Bobby passed away. Bobby is survived by his wife Dianne, children Teresa (Bobby) Helms and Michael (Stacey) Solomon, grandchildren Nicholas (Alissa) Helms, Michelle (Jeff) Holstein, and Noah (Riah) Solomon, and great-granddaughter Ella Holstein. Bobby was preceded in death by his grandson, Isaac Solomon. Bobby and Dianne graduated together from Concord High School in Concord, NC on June 1, 1958. One week later, they were married. Throughout their almost 63 years of marriage, they lived in Concord, Charlotte, back in Concord, and then followed the Bell System to Cobb County, GA. Bobby started working for Western Electric right after he graduated high school and ended up retiring from AT&T as a Systems Technician, maintaining PBX systems for large AT&T clients in downtown Atlanta. Bobby always loved cars and was fortunate enough to own a few classics. He and Dianne owned two vintage Austin Healy sports cars (a Roadster and a Sprite) early in their marriage. They often drove these cars in road rallies in the mountains of North Carolina. Bobby’s favorite car was a 1965 El Camino that he meticulously restored and customized. He poured untold hours of time and love into that car, only to have his heart broken when it was stolen from him. After having his favorite car taken from him, Bobby turned his passion to woodworking. He built a woodworking shop in his basement and produced hundreds of gifts, toys, pieces of furniture, and useful items over the next couple decades. Most of Bobby’s family has several of his pieces in their homes. While there are many ways to describe Bobby, most everyone who knew him would say that he was a caring and generous man who enjoyed helping others, loved his family and loved Jesus. Bobby was always eager to recount the story of when he was saved and how much he loved the Lord. Bobby was a loving husband, father, grandfather (Papa Bob), and great-grandfather. Bobby’s family will hold a private ceremony celebrating his life. He will be sorely missed. Online guest book at www.westcobbfuneralhome.com.

The family of Robert Samuel Solomon created this Life Tributes page to make it easy to share your memories.

Robert “Bobby” Samuel Solomon passed away at his home on Saturday,...

Send flowers to the Solomon family.