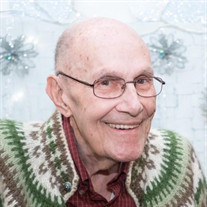 Robert George Scheid, age 88, of Powder Springs, GA passed away Monday, March 16, 2020. Memorial Services will be announced at a later date. Mr. Scheid was born February 17, 1932, in New York City. He was a first generation American, born into a German family. He was reared as a Lutheran, but came to a saving knowledge of Christ at the age of 17, and started attending Yonkers Gospel Chapel. In 1949, at the age of 17, he joined the Navy, because, as he put it, he was about to drafted into the Army. He served honorably during the Korean War and was discharged in 1955. He enrolled in Emmaus Bible School, in Oak Park, IL, in 1955, and while he was a student there, he met a missionary, Katherine Morgan. This relationship had a profound effect on his life and future love for missions. While in Chicago, he worked for Union Carbide, and transferred back to New York in 1957. He met the love of his life, Carol, at a Memorial Day picnic in 1965, and made a stellar impression on her by unceremoniously letting her know that her slip was showing. Despite that inauspicious beginning, they were married on November 19, 1966, in Kearny, NJ. Bob also had a love for working with the homeless and downtrodden. In 1967, he co-founded the Yonkers Gospel Mission in NY. They had one son, Matthew, in July 1968, a daughter, Louise, in July 1970, who passed away shortly after birth. Later that year, the family moved to Westchester County, NY, and then had another daughter, Katherine, in November 1971. Bob continued to work at Union Carbide until 1973, when Bob and Carol felt called to the mission field. They moved to Iceland and planted churches and worked with youth clubs. In 1976, they moved back to New York. After much prayer, the Lord led them to Birmingham, AL, to work with a local church. While in Birmingham, he worked at the Jimmie Hale Mission and the Brother Bryan Mission. He also served as bus driver for Alliance Christian School, where Carol taught, and the kids attended. Bob and Carol worked with the youth group at Believers' Chapel, and Bob served as an elder. A lifelong train enthusiast, he found kindred spirit for model trains in his dear friend Steve Davis. In the 1980s, he started volunteering with Emmaus Correspondence School, sending courses to prisoners all over the state of Alabama. He ran the Alabama ministry until the late 2000s when he started working with prisoners in Georgia until the mid-2010s. He retired from the Jimmie Hale Mission in 2005 and moved to Powder Springs, Georgia, to be a full-time Opa to Audrey and Reagan, who impatiently entered the world twelve weeks early. For good measure and to ensure he stayed, he and Carol were blessed with two more grandchildren, Miller and Charlotte. Robert was preceded in death by his parents, George Joseph and Margaret Louise Scheid, his brother, Richard (Pat) Scheid, and his daughter, Louise Scheid. He is survived by his devoted wife, Carol Louise Scheid, His little brother, Paul (Geri) Scheid, his favorite son, Matthew David Scheid, his child of promise, Katherine Joy (Clint) Pollard and four grandchildren who fiercely loved him, Audrey Grace, Reagan Louise, Miller Cavanagh, and Charlotte Joy Pollard. In lieu of flowers, please send donations to Christian Missions in Many Lands https://www.cmml.us/donate or Emmaus Correspondence Ministry https://emmausworldwide.org/pages/donate.

The family of Robert George Scheid created this Life Tributes page to make it easy to share your memories.

Send flowers to the Scheid family.