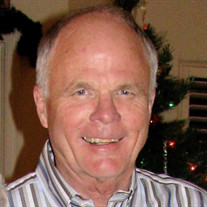 Robert (Bob) Bynum Dorrell was born on October 30, 1940 and passed away peacefully on October 17, 2021. Bob was born to Bethel Bynum Dorrell and Ima Miller Dorrell in Houston, Texas. He spent his childhood in Deer Park, Texas where his father worked as an executive for Shell. Bob was an outstanding athlete at Deer Park and excelled in baseball, football and basketball. He was honored by his classmates as Mr. Deer Park his senior year in high school. Bob attended the University of Texas at Austin where he received a degree in business. He belonged to the Phi Delta Theta fraternity and made many lifelong friends. Bob would go on to UT law school and graduate in 1966. In 1970 he met and married the love of his life, his wife Elizabeth (Betsy) Creveling. They began their life together in Houston then moved to Corpus Christi a few years later to raise their family. Bob owned and operated a printing business in Corpus for many years. More recently he worked as a contractor in the oil and gas industry. He enjoyed driving around the great state of Texas meeting and working with all types of people. Bob loved fishing the Texas gulf coast with friends. He was affectionately nicknamed 'catfish' by his closest friends and they made priceless memories out on the water. He and Betsy also enjoyed playing golf and discovering new courses together. Bob will be remembered as a kind, fun, generous person who loved his family above all else. He had a special way with people and drew them in with his warmth and authenticity. Bob was a loving husband, father, grandfather and brother. He and Betsy had many wonderful times traveling together and made great memories with their children on family trips. They moved to Dallas, Georgia four years ago to be near their daughter and grandchildren. Bob enjoyed their new surroundings but especially the time spent with family. He is survived by his wife and best friend, Elizabeth (Betsy) Dorrell; children Kerby Dorrell and Katie Dorrell Jolliff; daughter-in-law, Brandy Smith Dorrell; son-in-law, Jason Jolliff; and three precious grandchildren Avery, Jack and Bruce. He is also survived by his beloved sister, LouAdele May. There will be a private family gathering to commemorate Bob's life well lived. If you would like to honor him, please donate to the charity of your choice.

Robert (Bob) Bynum Dorrell was born on October 30, 1940 and passed away peacefully on October 17, 2021. Bob was born to Bethel Bynum Dorrell and Ima Miller Dorrell in Houston, Texas. He spent his childhood in Deer Park, Texas where his father... View Obituary & Service Information

The family of Robert B. Dorrell created this Life Tributes page to make it easy to share your memories.

Send flowers to the Dorrell family.