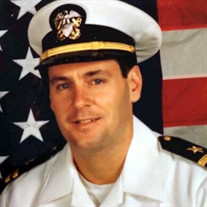 We say farewell to a treasured father, brother, son, and friend, who passed away suddenly on December 22, 2021, reuniting with his beloved wife, Donna. He is known as Bob to some, as Robert to others, and most importantly, Dad, to his three wonderful children. Bob was raised in Ventnor, NJ and truly loved the beach, working several summers as a Margate City lifeguard, making good use of mirrored shades. He enjoyed his summer visits with his family, getting a chance to ride a few waves and catch up with old friends. In his youth he was a passionate athlete. His skills culminated in a trip to Henley England as part of the crew team from Holy Spirit High School rowing to a 1981 Henley World Championship, coached by the renowned Stan Bergman. He continued his rowing career in college, where “no pain like crew pain” continued. Bob was trained as a mechanical engineer, and his career path took him to the United States Navy where he became a helicopter pilot after completing an intense two-year flight training program that filtered his class of 46 down to only seven graduating pilots. His naval career included to two tours in the Persian Gulf where he served with the Atlantic Fleet. In addition, he performed counter-narcotics operations. He truly valued his Naval career and loved the camaraderie and adventure that it provided. He married the love his life, Donna Frolow in 1998 and he began the most valued aspect of his life - a husband and a father to three wonderful children: Jack, 22, and twins Caroline and Annie, 19. They lived in Havertown, PA prior to a move to Acworth, GA, where he was a dedicated member of his community and loved coaching youth sports, particularly lacrosse. In addition, he was a member of the Trinity Justice Lodge #79, Egg Harbor Township, NJ. He was drawn to the Masons by his cherished father-in-law, David Frolow. He is preceded in death by his wife, Donna Lee Dennehy, his father, Francis X Dennehy and his father-in-law, David Frolow. He is survived by his children, Jack, Caroline, and Annie, his mother, Margaret Dennehy, brothers, Francis Dennehy (Kristen) + John Terrence Dennehy (Tessa), his sister, Christine Hale (Daniel), his mother in law, Diana Frolow, his sisters-in-law, Danielle Falco (John) and Dawn Hanselmann (Bob), as well as many cousins, nieces and nephews. His hearty laugh and strong hugs will be missed. Until we meet again, may God hold you in the palm of his hand. A service will be held at Mars Hill Church in Powder Springs, GA for family and close friends. 1/5/2022 Receiving 1pm-2pm. Service at 2pm. Given the current health situation, masks are requested. A spring service in NJ is planned. In lieu of flowers please make a donation to PanCan for pancreatic cancer research or the Air Warrior Courage Foundation. https://www.pancan.org/ http://www.airwarriorcourage.org/

We say farewell to a treasured father, brother, son, and friend, who passed away suddenly on December 22, 2021, reuniting with his beloved wife, Donna. He is known as Bob to some, as Robert to others, and most importantly, Dad, to his three... View Obituary & Service Information

We say farewell to a treasured father, brother, son, and friend,...

Send flowers to the Dennehy family.