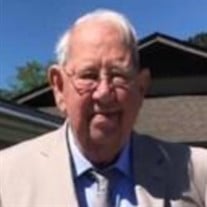 Robert "Bob" James Kroner, age 95, of Dallas, Georgia passed away Wednesday, July 8, 2020. Funeral Services will be held at 2:00 pm on Sunday, July 12, 2020 at Nativity Lutheran Church in Austell with Pastor Dena Lane officiating. Interment will follow at Mountain View Cemetery in Marietta, Georgia. Born on June 15, 1925, Mr. Kroner moved to Atlanta in 1952 from Auburn, AL. He was a veteran of the United States Army, having served as a medic during WWII in the 1st Airborne Medical Unit Task Force, stationed in Nice, France, 676 Medical Collecting Company. He graduated with a Bachelor's Degree from Auburn University. He retired from Lockheed as a Technical Illustrator after 35 years of employment. He was a member of the Cobb Community Players, and of the Nativity Lutheran Church in Austell. One of his favorite personal accomplishments was restoring an old farmhouse that was built in 1880. Survivors include: Two Children, Karen K. Buckner, Dallas, GA and Teri K. Jackson and husband Bart, Jefferson, GA; Step Children, Ronny S. Thompson and wife Leslie, Marietta, GA and Gloria T. Kemp and husband Tommy, Buford, GA; Six Grandsons and one granddaughter, 14 Great Grandchildren and many Nieces and Nephews. In lieu of flowers, donations may be made in Robert "Bob" Kroner's memory to Nativity Lutheran Church, 2450 Clay Road, Austell, GA 30106. The family will receive friends on Sunday, July 12, 2020 from 1:00 pm until 2:00 pm at Nativity Lutheran Church in Austell. Complete Obituary and Online guest book at www.westcobbfuneralhome.com. STRICT SOCIAL DISTANCING GUIDELINES WILL BE ADHERED TO

The family of Robert "Bob" James Kroner created this Life Tributes page to make it easy to share your memories.

Send flowers to the Kroner family.