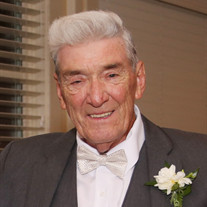 Richard Taylor, 81, of Marietta, GA passed away on February 27, 2021. Rick was born in Dante, VA, on August 8, 1939, to Bone and Ruby Taylor, who preceded him in death. He graduated from Science Hill High School in Johnson City, TN, where it is said Rick lied about his age in order to join the National Guard as a reservist in 1956. After graduation, he joined the Army and served as a parachute rigger in the 82nd Airborne. He attended jump school in Fort Bragg, NC, and parachute packing in aerial delivery in Fort Lee, VA. He later served as company training NCO. Rick demonstrated a strong work ethic and willingness to serve even at an early age. As a young boy, Rick delivered papers for the Johnson City Press-Chronicle. In high school, he worked for Hospital Pharmacy in Johnson City and was an aspiring pharmacist. His career path changed when he went to work for General Shale Brick in customer service in Kingsport, TN. First promoted to Field Sales Representative in the Elizabethton office, he was then promoted to District Sales Manager in Kingsport before transferring to the Atlanta office. He worked for General Shale for almost 34 years before retiring. After retirement, he enjoyed visiting out-of-state friends, driving around in his little red Miata, playing golf, going fishing, drinking a good beer, and being involved in his condo community. He also enjoyed the company of is two miniature schnauzers, Bogey and Chip. But most of all, he enjoyed helping others and took pride in being there for his family and friends. Rick is survived by his daughter, Kellie Brewer (Alan) of Kennesaw, GA, two granddaughters, Samantha True of Chambersburg, PA, and Lindsey True Magnicheri (Phillip) of Acworth, GA. He is also survived by his sister, Georgia Slutter and niece, Julia Burgess of Fredericksburg, VA, niece Stephanie Booher of Stone Mountain, GA, and nephew Jeff Booher (Julia) of Madison, IN. Rick's family extends their sincere gratitude and thanks to all the medical staff that was part of his healthcare team, especially Dr. Rodolfo Bordoni, Michelle Goebel, LPN, and the staff at Georgia Cancer Specialists. In addition, we are grateful to Heather Lawrence, Kennedy Berry, Kelly Buckner, HonestAide Service, and Homestead Hospice for the wonderful care they provided. Services will be held at West Cobb Funeral Home in Marietta, GA, on Saturday, March 20. Visitation is at 2:00 pm with the service to follow at 4:00 pm. Interment will take place on Monday, March 22 at the Georgia National Cemetery in Canton. In lieu of flowers, memorial donations can be made to Headstrong, Healing the Hidden Wounds of War at getheadstrong.org and select option to donate in memory of. Online guest book at www.westcobbfuneralhome.com.

Richard Taylor, 81, of Marietta, GA passed away on February 27, 2021. Rick was born in Dante, VA, on August 8, 1939, to Bone and Ruby Taylor, who preceded him in death. He graduated from Science Hill High School in Johnson City, TN, where it... View Obituary & Service Information

The family of Richard Taylor created this Life Tributes page to make it easy to share your memories.