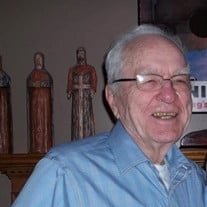 Richard Claiborne Spain was one of the rare people lucky enough to live several lives in his not-quite-a-century on Earth. He was born on March 11, 1927, in Petersburg, Virginia. He received a bachelor's degree from Mississippi College and a Master of Divinity degree from the New Orleans Baptist Theological Seminary. He could speak, read, or write in seven languages. A skilled musician, he was the organist for many years at Gentilly Baptist Church in New Orleans and the pianist at Mary Branan Memorial United Methodist Church in Atlanta. A lover of nature - and fond of wandering into the nearest woods or just around the block or into the backyard, to see what might be growing - Richard taught science to high school students for most of his career, in both Bremen, Georgia, and in New Orleans, Louisiana. He studied and grew orchids and loved to tell stories about the orchids he discovered in Mexico and Costa Rica. He loved so many other things: technology (often with his cargo pant pockets full of some small gadget or another) and the weather and puzzle books and Family Feud. His grandchildren loved walking with him on the beach at St. George Island along the Gulf of Mexico, where they picked up shells and their Grandpa Richard told them about each type. He also loved to tell stories about his life: tutoring students for shrimp as payment, floating down the canal to chaperone a student home, selling photographs with his college roommate - a photographer - to pay for college. And he was a prankster, sticking his tongue out at his grandkids, joking with the nurses during his many hospital stays, competing with his grandson to see who could bend the bottle cap in half first. Richard died on Sept. 1, 2020, in Dallas, Georgia. He is predeceased by his first wife, Elizabeth Charlene Weathersby Spain, his sons, Charles Marshall Spain and Richard Claiborne Spain Jr., his brothers, Charles E. Spain Jr., Arthur Spain and James Spain, his second wife, Barbara Goodwin Spain, and two nephews. He is survived by his daughter, Sarah Elizabeth Spain (John Mosier); his stepdaughter, Frances Carlson (Clay Carlson) and stepson Kevin Manos (Pauline Nelan-Manos); grandchildren Jeremy Spain, Daniel Boone Woerheide, Jessica Spain, Alex and Jon Manos, and Adam, Sam and Caty Carlson; and 10 nieces and nephews. A private memorial service will he held on 20 September 2020 at Red Top Mountain State Park.

Richard Claiborne Spain was one of the rare people lucky enough to live several lives in his not-quite-a-century on Earth. He was born on March 11, 1927, in Petersburg, Virginia. He received a bachelor's degree from Mississippi College and... View Obituary & Service Information

The family of Richard Spain created this Life Tributes page to make it easy to share your memories.

Richard Claiborne Spain was one of the rare people lucky enough...

Send flowers to the Spain family.