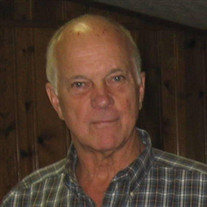 Richard Allen Long, Sr., age 79, of Villa Rica, Georgia passed away Saturday, April 17, 2021. Funeral Services will be held at 2:00 pm on Wednesday, April 21, 2021 at West Cobb Funeral Home and Crematory in Marietta with Rev. Bill Rorie officiating. Interment will follow at Sunrise Memorial Gardens in Douglasville, Georgia. Richard Allen Long, Sr. was born July 10, 1941 in the old Georgia Baptist Hospital in Atlanta, GA. His family lived on Wesley Chapel Road in Decatur, GA. In 1961, he graduated from Cass High School in Cassville, GA. His dad taught him and his brother to fly, and at the age of 17 he flew his first solo flight from Kline Field (a small dirt strip) in Cassville, GA in a J-5 Super Cruiser. He put his heart into everything that he did. He worked very hard all of his life, frequently working more than two jobs. He owned and operated L and L Enterprises for 34 years, and when it came to delivering service at his place of business, he believed in a strict honesty policy. He was a family man and had strong, loving ties to all of his family. He was a man of faith and prided himself on the fact that he had not ever used a curse word. He also enjoyed jet skiing, boating and trail riding. He was preceded in death by his parents, Lee Roy and Elizabeth Louise Long, and his wife, June Shearon Long. He is survived by 4 Children, Justine (John) Russell, Winston, GA, Deborah Thornburg, Dallas, GA, Richard Allen Long, Jr., Winston, GA and Michelle (William) Davidson, Franklin, GA; Brother, Terry Long, Conyers, GA; Sister, Frances (Richard) Greene, Decatur, GA; 8 Grandchildren, 10 Great Grandchildren and 1 Great-Great Grandchild.. The family will receive friends on Tuesday, April 20, 2021 from 6:00 pm until 8:00 pm at West Cobb Funeral Home and Crematory in Marietta. Online guest book at www.westcobbfuneralhome.com.

The family of Richard Allen Long Sr. created this Life Tributes page to make it easy to share your memories.

Send flowers to the Long family.