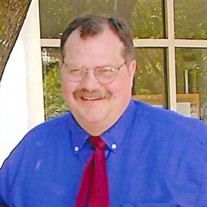 Richard Peter Jordan, age 62, of Marietta, Georgia passed away Thursday, February 3, 2022. A Memorial Service will be held at 2:00 pm on Saturday, February 12, 2022 at West Cobb Funeral Home and Crematory in Marietta. The family will receive friends on Saturday, February 12th from 1:00 pm until 2:00 pm prior to the ceremony with a reception to follow. A native of Delaware and a brother of the Pi Kappa Alpha fraternity, Richard graduated from the University of Delaware with a Bachelor's degree in English and History. Rich returned to his home state in1987 after living in Houston, Texas for a few years before finally settling in Georgia in 2000. He worked for several companies, including First Data, EDI, Ross and Baruzzini, and was a principal partner with Facility Gateway. Richard was a devoted husband to his wife of 37 years, Michelle Foy Jordan, and a proud father and grandfather to Robert Foy Jordan, Kirsten Jordan and Fletcher Jordan of Griffin, GA, as well as Ensign Stephen Benjamin Jordan and Jenn Croft of Boston , MA. He is also survived by sister Judith Jordan of Maryland and Mother-in-Law, Dessel Foy of Westchester, PA in addition to other nieces, nephews, cousins and in-laws. An avid fisherman and hunter, with an encyclopedic knowledge of history, loved ones fought to be his partner during family trivia. In lieu of flowers, donations may be made in Richard Jordan's memory to the Arthritis Foundation @ www.arthritis.org , or to the Cobb County Animal Shelter @ www.cobbcountry.org/public-safety/animal-services/adoption. An online guest book is available at www.westcobbfuneralhome.com.

Richard Peter Jordan, age 62, of Marietta, Georgia passed away Thursday, February 3, 2022. A Memorial Service will be held at 2:00 pm on Saturday, February 12, 2022 at West Cobb Funeral Home and Crematory in Marietta. The family will receive... View Obituary & Service Information

The family of Richard Peter Jordan created this Life Tributes page to make it easy to share your memories.

Send flowers to the Jordan family.