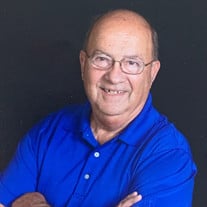 Visitation: West Cobb Funeral Home 2480 Macland Rd. Marietta, GA Friday April 2, 5-7pm Renaud Charles Guite, Jr., of Powder Springs, Georgia, passed into eternity to be with his Lord and Savior on March 30, 2021. After a courageous battle with cancer, he passed peacefully at home surrounded by his wife and children. Born in Waterville, Maine, he was the second of four children born to the late Charles John Renaud and Constance Yvette Guite. Ren was a graduate of Lawrence High School in Fairfield, ME, class of 1959 and college graduate of the University of Maine, earning a BS Degree in Chemical Engineering and certificate in Pulp and Paper Management in 1964. His career began in Painesville, Ohio at Diamond Shamrock Chemical Company. It is while he was in Ohio that he met his wife Ginger and they married in 1967. They moved to Enfield, CT and later Somers, CT when he was employed at the Dexter Corporation in 1969. He retired as a machine superintendent in 1999. In his free time, Ren enjoyed square dancing, cribbage, bridge, bowling, golfing, gardening, traveling and challenging himself with sudoku and crossword puzzles. He was a devoted family man and cherished spending time with his children and grandchildren. He enjoyed vacationing in his home state of Maine. Ren was an avid fan of the NY Yankees, NY Giants and UConn Women’s basketball teams. Ren is survived by his loving wife of 53 years, Ginger Guite and his four children, Julie & Todd Harrison – Broad Brook, CT, Dean & Bridget Guite – Marietta, GA, Randy & Carlin Guite – Clearwater, FL, Danielle and Esteban Montllau – Monte, Argentina. His grandchildren Todd Jr., Brandon, Brianna (Mike), Lucas, Dean Jr., Damian, Kathryn, Leonel, and great-granddaughter Mia Grace. He also leaves behind two surviving siblings: William Guite and wife Gloria of Benton, ME, Margaret Holland of Plattsburgh, NY and brother-in-law James Young and wife Tommie Austin Young of Raleigh, NC, and many beloved nieces, nephews and cousins. In addition to his parents, Ren was predeceased by his sister Patricia Pooler and her husband Charles of Fairfield, ME and brother-in-law Gerald Holland of Plattsburgh, NY. Online guestbook at westcobbfuneralhome.com

The family of Renaud Charles Guite Jr. created this Life Tributes page to make it easy to share your memories.

Send flowers to the Guite family.