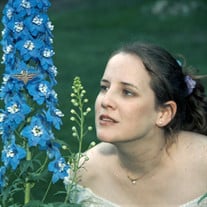 Rebecca Ann Koos was born August 25, 1970 in Houston, TX. She grew up in Friendswood, Texas, the youngest of four children. Her mom admits, as the last child, they spoiled her some, letting her skip school to go out to lunch on occasion. She tried to wear the same dress to kindergarten every day when she started school, but her sisters talked her out of it. While growing up, Rebecca enjoyed competitive swimming and going on family vacations such as Washington DC, Colorado and New Mexico. In 1984 at the age of 13 she was diagnosed with a brain tumor and underwent radiation treatment at MD Anderson. She earned the name "Bucket" from her lifelong friend Lisa Beckman during that time, because she had to keep a bucket by her side, for nausea. It stuck, as she kept that moniker for quite a few years, signing her emails "Bucket of Hope." She beat the odds and survived with profound hearing loss. Later that year she was a bridesmaid in her sister Deborah's wedding. She graduated from Friendswood High School in 1987. She then attended Sam Houston State University, graduating with a degree in photography in 1991. During her time at college, she adopted a dog and named her Hope. Not long after, she became a vegan, out of her love for animals, to stand against their inhumane treatment, and for the wellbeing of the environment. She volunteered with many charities and non-profits throughout her Life. After college she worked a couple years for E-Six Lab of Atlanta developing film and also did some freelance photography. She later self-published a book of photographs, poetry and stories called Spirit Your Reality-Contemplative Images, which included her photos and poetry and notes to family and friends. She also enjoyed jigsaw puzzles, often putting together 1000-piece puzzles. In 2000, she attended San Francisco Theological Seminary and earned a masters in Theological Studies. During her time there she met Rick Sullivan on an on-line veggie date site. He flew from Atlanta to meet her. Once she graduated, she moved to Atlanta and they were married August 4, of 2003 in Colorado. They resided in Kennesaw, Georgia. In their nearly 19 years together Rebecca loved to travel the world, taking photos and connecting with people everywhere. Their greatest joy has been their daughter, Sierra, born November 17, 2015. At the end of 2020, Rebecca experienced symptoms similar to her previous brain tumor. She was diagnosed with a brain stem glioblastoma in early 2021 and underwent radiation, chemotherapy and monoclonal antibody treatment at Emory University. Although her condition deteriorated greatly over time, she persevered and never lost her sense of humor. She and Rick were known as Wonder Woman and Superman at the many doctor appointments, wearing their respective shirts, socks and masks to show their resolve. Rick cared for Rebecca at their home throughout her extended illness. Rebecca died at home with husband Rick and daughter Sierra at her side on April 9th, 2022. She is also survived by her parents, Richard and Beverly Koos of Davenport, IA, her aunt Ruth Hefferman, also from Iowa, her sisters Carrie Brazil of Woodstock, GA Deborah (Kevin) Camp of Indianapolis IN, and brother Tim of Davenport, IA. She is also survived by nieces Sydney and Madelynn Camp, and nephews Ryan Camp, and Grant, Collin and Sawyer Brazil. An informal celebration and remembrance of Rebecca's life will be held on Sunday, April 24th from 2-4 pm at the family home for friends and family wishing to pay their respects. In lieu of flowers, please donate to a charity you know Rebecca supported. Peace and Smiles……as Rebecca would sign-off.

Rebecca Ann Koos was born August 25, 1970 in Houston, TX. She grew up in Friendswood, Texas, the youngest of four children. Her mom admits, as the last child, they spoiled her some, letting her skip school to go out to lunch on occasion.... View Obituary & Service Information

The family of Rebecca Ann Koos created this Life Tributes page to make it easy to share your memories.

Send flowers to the Koos family.