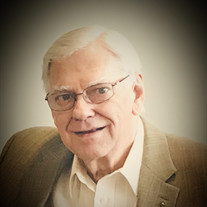 Randall Paul "Randy" Ferguson, age 76, of Dallas, Georgia, died Friday, February 18, 2022 at Wellstar Tranquility - Kennesaw Mountain. A memorial service will be held at 3:00 pm on Friday, February 25, 2022, at West Cobb Funeral Home and Crematory, 2480 Macland Rd, Marietta, GA 30064. The family will receive friends from 1pm to 3pm prior to the ceremony at the funeral home. A native of Paintsville, Kentucky, Mr. Ferguson lived in Denham Springs, LA for over 30 years. He was a member of New Covenant Baptist Church and The Gideons International before moving to Dallas, GA in 2017. Soon after that move, he became a member of Burnt Hickory Baptist Church in Powder Springs, GA, particularly enjoying his time with the Joy Class Lifegroup. Randy was also a veteran of the United States Army, having served in Germany during the Vietnam War due to his proficiency in the German language. He had an entrepreneurial spirit. He owned and operated R.P. Ferguson and Associates for many years. Randy excelled in sports as a young man, playing basketball at Dyer Central High School in Dyer, Indiana, and at Perdue University. Not only did he love playing basketball, but following collegiate sports (especially LSU and Kentucky) remained a favorite activity throughout his life. He is survived by his wife of 34 years, Paulette V. Ferguson; step-children, Cynthia Johnston, Holden, LA., Alex G. Bush, Covington, LA., Dana (Thomas) Bourque, Gonzales, LA, and Trina (Mark) Zwolle, Dallas, GA; 2 sisters, Karen (Richard) Reynolds, Fort Myers, FL, and Diane (Brian) Brown; 9 Grandchildren, 1 great grandchild, and numerous nieces and nephews. He was preceded in death by his parents, Leander and Maude Ferguson, a brother, Darrel Gene Ferguson, and a sister, Sue (Ferguson) Feterick. In lieu of flowers, donations may be made in Randall Ferguson's memory to The Gideons International at www.gideons.org. Online guest book at www.westcobbfuneralhome.com.

The family of Randall P Ferguson created this Life Tributes page to make it easy to share your memories.

Send flowers to the Ferguson family.