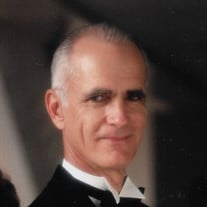 Ralph Kay Miller, Sr., age 89, of Mableton, Georgia passed away August 22, 2020. Funeral Service will be held at 6:00 pm on Wednesday, August 26, 2020 at West Cobb Funeral Home and Crematory Chapel in Marietta, GA with Rev. Alan Davis officiating. Interment will be held at Westview Cemetery in Atlanta, Georgia. Ralph Miller was born in Fitzgerald, Georgia in 1931 to parents Willis and Estelle Miller. His family moved to Atlanta when he was 3 years old and he spent his formative years there. He attended Tech High then graduated from Brown High School in 1949. He entered Georgia Tech as a freshman then enlisted in the Navy and served in the Korean War on the USS Piedmont. He married the love of his life, Joyce Hogue (whom he met in kindergarten) in 1952. They remained married for over 68 years. Ralph took a job with the Georgia Power Company, initially buying right-of-way and grew into management in the Land Department during his tenure. He retired and enjoyed 32 years spending time with family and friends, playing golf, traveling and gardening. Ralph and Joyce settled in Mableton, Georgia and raised three children, Ralph, Jr., Laurie (Canning) and Cynthia (Turnipseed). Ralph is preceded in death by his son, Ralph Jr. He is survived by his wife Joyce, daughters Laurie (Mike) and Cynthia (Randy), and daughter-in-law Sandy. He was Granddaddy to Joe Miller, Krista Tsosie, Ashley Makarevich, Blaine Taylor, Kendyll Canning and Chance Turnipseed. The family will receive friends on Wednesday, August 26, 2020 from 4:00 pm until 6:00 pm at West Cobb Funeral Home and Crematory in Marietta, GA. Donations can be made to Must Ministries at www.mustministries.org

The family of Ralph Miller created this Life Tributes page to make it easy to share your memories.

Send flowers to the Miller family.