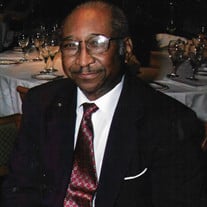 Jack Phenecia Cannon Morris, age 95, of Atlanta, Georgia passed away December 3, 2021. Funeral Service will be held at 1:30 pm on Tuesday, December 21, 2021 at Georgia National Cemetery in Canton, GA. The family will receive friends Monday, December 20, 2021 from 5:00 p.m. until 7:00 p.m. at West Cobb Funeral Home and Crematory in Marietta. Jack* Phenecia Cannon Morris was the elder son of Carrie and Henry Morris, Sr., born March 23, 1926, and departed this world peacefully on December 3, 2021. He led a full life, made complete with his love of God, his wife, Mary Ethel Belcher, daughter, Marilyn Morris, family and friends. Jack was born in Jacksonville, Florida, but grew up in the 4th Ward of Atlanta, GA, with his brother, Henry Morris, Jr.; parents, Carrie and Henry Morris; aunt and uncle, Addie and Albert Sloan; in-laws, the Belchers; and other family and friends. His mother raised him and his brother to follow Christ Jesus in all they did. He followed her direction, with some minor detours. One detour was his attraction to Buddhism. His mother-in-law, Mrs. Orabelle Belcher, reprimanded him and called him "Buddhie"until he returned completely to Christianity. He married the love of his life, Mary Ethel Belcher, on April 21, 1949, and later adopted Marilyn Phenecia in 1960. His love for his wife, Mary, nicknamed Bobbie, was evident. His niece, Tia Alvarez-Stith, shared: "The greatest impression he left on me was his love for Aunt Bobbie. It was adorably charming to listen to him tell the story of how he knew he was going to have "a Belcher girl". She seemed to be his prize in life despite all of his other accomplishments and things he'd overcome. The stories of the life they built, and watching them live happily together, were heartwarming and inspirational. I still remember the reverence he had for her, even in the most simple situations." Not until the last few years, did Jack share his experiences during World War II, which were rife with struggles amid successes. He was a WWII Army veteran, and earned the following credentials: Asiatic Pacific Theater Campaign ribbon with a Bronze Star for heroic or meritorious achievement; Army of Occupation ribbon in Japan during June - July 1944, Saipan; Victory ribbon with two overseas bars. His niece, Raye-John Belcher Luttrell, recounted "...his knack for pulling anyone who would listen into his philosophical discussions about race, politics, religion and anything regarding human nature in general. I will never forget the time he talked through the movie "Top Gun", like a military consultant and movie commentator to expertly analyze the reasons for Maverick's reactions to military orders thrust upon him." After the war, Jack, graduated from Clark College and applied to Meharry Medical College, but was not selected. He turned his attention to education, and became one of the first black male teachers in the Atlanta Public Schools. His love of music led him to being a music teacher/band director who played all instruments and taught hundreds of Atlantans. Jack continued his education, and became the first recipient of the Education Specialist degree from Atlanta University. Jack was a fervent Christian and former member of Big Bethel AME church, where he attended service every Sunday. He also attended Sunday service at St. Paul of the Cross Catholic church, with his wife and daughter. Eventually, he converted to Catholicism and joined several organizations, including the Men's Club, Knights of Columbus, and Bible Study. His cousin, Tony Cannon, remarked "We lost a giant this morning! Jack was the embodiment of all good things every man should be. He lived a full life and through him, many others have lived meaningful lives by following in his footsteps." "Jack" Phenecia Cannon Morris, would remind each of us per Revelation 21:4 "He will wipe away every tear from their eyes, and death shall be no more, neither shall there be mourning, nor crying, nor pain anymore, for the former things have passed away." *During the past few years, my father, requested that he be referred to as "Jack", the name his father called him. Due to his request, "Jack", is used as his preferred name. In lieu of flowers, donations can be made to the Alzheimer's Association at https://www.alz.org/

The family of Phenecia Cannon Morris created this Life Tributes page to make it easy to share your memories.