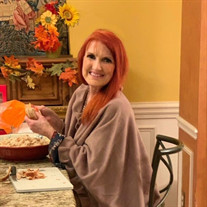 Paula Marie Hogue, age 69, of Marietta, Georgia passed away September 18, 2020. Paula was born on November 4, 1950, in Birmingham, Alabama to parents Mary and Paul Harmon. Paula was very close to her sister Sandra Strom where both attended the University of Mississippi (Ole Miss) and were in the Alpha Omicron Pi sorority. Paula majored in Elementary Education and graduated in 1969. While in college, Paula met her future husband Louis Edward Hogue, they would eventually marry (30 years), and had three children: Jonathan, Shawn, and Elizabeth. Paula and Louis began their burgeoning family in Jackson, Mississippi, where they lived close to both her sister Sandra and her husband, Bert Strom, M.D., and Louis' sister Glenda and her husband James Black. Glenda and Paula would share a lifelong bond rooted in their faith that only seemed to grow stronger with time. During these years, Paula also served as an active member of her church, and became an advocate for children with disabilities. Paula founded Mississippi's first parents’ alliance for children with disabilities in Jackson committing countless hours serving this underserved community. Paula and Louis left Mississippi for Nashville, Tennessee, in 1992, where Paula continued her passion for teaching and advocacy for children with disabilities. Paula is best remembered during this time as an indefatigable advocate for her son Jonathan, and also the archetypical "soccer Mom" to her son Shawn. Paula's home was filled with the joy of family, friends, and hosting countless sleep overs, soccer parties, birthdays, pool outings, and other events. Louis was transferred in 1995 to Atlanta, Georgia, and Paula's greatest impact to both her family and community were made during these 25 years. She not only continued to tirelessly advocate for educational opportunities for her son Jonathan, but she also became a mother to her daughter Elizabeth. Her faith in Christ and Christian charity served as a central tenet and moral compass throughout her life, which she instilled in each of her children. Upon Louis' passing in 2006, Paula took great pains to ensure that each of her children were well cared for in the absence of their father. She became the primary caretaker for her son Jonathan while also raising her youngest daughter Elizabeth. She also committed considerable resources and support to assist her son Shawn in achieving his life long dream of becoming an attorney. Amazingly, she did all these things while managing to regularly serve countless others touching multiple lives along the way. She assumed numerous leadership roles in her church community, and focused on ministering to women caught in the bondage of human trafficking through the Out of Darkness ministry. She will sorely be missed by all those who knew her. Paula is survived by her sons Shawn and Jonathan, her daughter Elizabeth, and would have been a Grandmother to Elizabeth's unborn child Layla Paula Marie Carson. The family will receive friends on Friday, September 25, 2020 from 5-8pm at West Cobb Funeral Home and Crematory in Marietta. A private graveside service will be held for the family. In lieu of flowers, donations may be made to Paula Hogue's memory to Out of Darkness, a Christian ministry associated with the Atlanta Dream Center. Online guestbook at www.westcobbfuneralhome.com.

Paula Marie Hogue, age 69, of Marietta, Georgia passed away September 18, 2020. Paula was born on November 4, 1950, in Birmingham, Alabama to parents Mary and Paul Harmon. Paula was very close to her sister Sandra Strom where both attended... View Obituary & Service Information

The family of Paula Hogue created this Life Tributes page to make it easy to share your memories.

Send flowers to the Hogue family.