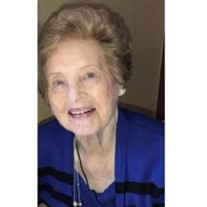 Nancy Catherine Carlisle Couch, aged 88, died of natural causes on April 1, 2020. She had been residing at Aspen Village Senior Living since February 2016. Nancy is survived by two daughters, Susan Couch Dewberry (spouse Dennis Dewberry), of Hiram, and Dana Couch Mobley (spouse Royce Mobley), of Suwanee. She is also survived by seven adult grandchildren, and seventeen great-grandchildren. She is also survived by two sisters, Martha Carlisle Baker and Bonnie Carlisle Westbrooks. Nancy is preceded in death by her husband of sixty-seven years, Arthur Clifton Couch, who died on January 26, 2018. Nancy and Arthur married on June 2, 1950 and lived happily together at several different residences through the years. They lived in Decatur, GA for three years; in Augusta, GA for one year, in Chamblee, GA for nine years; and, finally, in their beloved “Windwood Court” home for forty-five years, located near Dunwoody, GA. Nancy was born on October 26, 1931 at Henry Grady Memorial Hospital to parents Helen Drummond Carlisle and Dewey Lee Carlisle. She lived most of her youth in her parents’ home on Ponders Avenue in Atlanta, GA. She attended Home Park Elementary School, Girls High, and then graduated from O’Keefe High School in January 1950. Shortly before her graduation, a young man, Arthur Couch, fresh out of the Army Air Corps arrived at her parents’ house, and the two began a romance. They were married shortly thereafter. With rare exception, Nancy and Arthur spent every single day of their 67-year marriage living and working together. Nancy worked alongside Arthur from the day he opened an automobile service station for the Gulf Oil Company in 1961 until the day they both retired in 1994. Nancy was the bookkeeper at the various service stations Arthur owned and operated through the years, beginning with the Gulf Service Station at the corner of North Druid Hills Road and LaVista Road and concluding with the Union 76 Service Station located at the corner of Buford Highway and North Druid Hills Road. Nancy’s hobbies included reading, cooking, and enjoying her grandchildren and great grandchildren. Beach vacations, short trips to the mountains, shopping, and holiday celebrations with family are all things Nancy enjoyed. The family plans a private service at West Cobb Funeral Home and interment at Kennesaw Memorial Park. Feel free to make a donation to a charity close to your heart in Nancy’s honor.

The family of Nancy Couch created this Life Tributes page to make it easy to share your memories.

Send flowers to the Couch family.