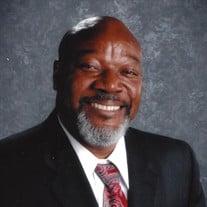 Mitchel L. "Mike" Bivens, age 66, of Marietta, Georgia passed away May 31, 2021. Memorial Service will be held at 11:00 am on Thursday, June 10, 2021 at West Cobb Funeral Home and Crematory Chapel in Marietta, GA. Interment will be held at Georgia National Cemtery in Canton, GA at a later date. The family will receive friends on Thursday, June 10, 2021 from 10:00 am until 11:00 am at West Cobb Funeral Home and Crematory in Marietta, GA. Minister Mitchel (Mike) Bivens departed this life peacefully on Monday, May 31, 2021 at Piedmont Atlanta Hospital. Mike was born on August 22, 1954 in Ocilla, GA to the late Willie Fred Bivens and Elvira Jones Bivens, who preceded him in death. He married Etta (Faye) Collier Bivens on April 15, 1979 and 5 children were born to this union. Mike was educated in the Irwin County School System in Ocilla, GA and became a member of Pleasant Grove First Baptist Church. After completing high school he joined the Army, which was always a dream of his. While in the military he was afforded the opportunity to travel around the world to such places as Turkey, Germany and France. After serving 20 years to our Nation in the Army, he decided to retire as a First Sergeant (E-8) and try his hand at law enforcement as a Crime Scene Investigator. Mike decided after three years, this is not in God’s plan and turned to the educational field. He started his career in education as a substitute teacher in which he felt this was God’s calling and ended up retiring as a Middle School Principal in Cobb County Georgia after giving 20 years to his community as an educator. During his tenure as an educational specialist, he was called by God to be ordained as a minister. He taught and lived Gods word until he was called home. He leaves to cherish his memories a devoted wife, Etta Bivens, three sons, Donavan Bivens of Savannah, GA, Charles Bivens (Darneshea) and Anthony Bivens (Terri) of Grovetown, Ga; two daughters, Devara Fields (Mark) of Villa Rica, GA and Ann Bivens of Clarksville, TN; Four sisters, Ressie Dunlap and Elizabeth Cook of Ocilla, GA, Edna Watkins (Ted) of Tifton, GA, Sherral Alford (James) of Augusta, GA and Charlene Bivens (as a sister) of Ocilla, GA; Two brothers, Willie Bivens (Mary), Tifton, GA, and Dan Bivens, Fitzgerald, GA; Three Sister-in-Laws and 6 Brother-in-Laws. Also, Derestine Denson (as a mother) and Lawrence Denson (as a brother) of Atlanta, GA. Along with 17 grandchildren and a host of nieces, nephews, cousins and friends. Preceded in death by: Willie Fred Bivens Date: May 3, 1996 Elvira Jones Bivens Date: December 2, 2000

Mitchel L. "Mike" Bivens, age 66, of Marietta, Georgia passed away May 31, 2021. Memorial Service will be held at 11:00 am on Thursday, June 10, 2021 at West Cobb Funeral Home and Crematory Chapel in Marietta, GA. Interment will be held at Georgia... View Obituary & Service Information

The family of Mitchel L. "Mike" Bivens created this Life Tributes page to make it easy to share your memories.

Send flowers to the Bivens family.