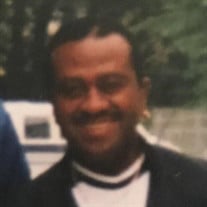 Milford James Evans (Big Chico), age 75, of Marietta, Georgia passed away May 31, 2020. A Private Service will be held at 2pm on June 13, 2020 at West Cobb Funeral Home and Crematory in Marietta. Chico was born in Boston, MA. to Cora Sykes and Leroy Evans. He graduated high school from Boston public schools and furthered his education at Massachusetts Institute of Technology. He had many talents that included singing/singing coach, and playing the drums and piano. Chico was known to be a great dresser. He was a fast learner. All you had to do is show him once and he would master it. After living in Boston for many years, he moved to California to broaden his horizons. He became an entrepreneur, and owner of s successful detail business. He met many entertainers that used his business. He was a great tennis player, and was a brown belt in karate. He taught exercise classes at his house where mostly women attended (lol). Chico loved eating devil dogs when he would visit Boston. One of the first places he wanted to go was to the store to purchase them. His brother, Raymond Sr., states that he was a protector AND ALWAYS THERE FOR HIM. He was preceded in death by his father, Leroy Evans and his mother, Cora Sykes; brothers, Leroy Evans Jr. and Jeffrey Johnson(Rico); and sister, Leatrice Gooding (Lisa). He is survived by his sisters, Francine Sykes, Maria Gooding Jones, and Bonita Gooding; brothers: Raymond Evans Sr, Rodney Johnson (lil Chico), Roosevelt Gooding (Rocky), and Robert Gooding (Bobby); son, Dwayne Evans; four grandchildren and several great grandchildren and a host of nieces and nephews. Special Acknowledgement to the Raymond Evans Jr Family and we send sincere appreciation to all who sent comforting messages, donations, floral tributes and other expressions of kindness. Online guest book at www.westcobbfuneralhome.com.

Milford James Evans (Big Chico), age 75, of Marietta, Georgia passed away May 31, 2020. A Private Service will be held at 2pm on June 13, 2020 at West Cobb Funeral Home and Crematory in Marietta. Chico was born in Boston, MA. to Cora Sykes... View Obituary & Service Information

The family of Milford Evans created this Life Tributes page to make it easy to share your memories.

Send flowers to the Evans family.