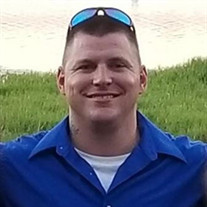 Michael Dennis Dean Jr. March 29th, 1986- May 15th, 2021. On May 15, 2021, the world lost a piece of itself as Michael Dennis Dean Jr gained his wings. Michael was many things to many people but his favorite titles were Father, Husband, Son, and Coach. Mike lit up any room and his huge loving heart drew everyone in that he met. He adored and protected them. Michael’s wife, Laura Dean, was the love of his life. They met in highschool and built their life in Marietta, Georgia. Together they have 5 children who will miss him dearly. Faith Theodoracopoulos (19), Elijah Kiper (16), Michael Dean III (15), Brayden Kiper (7), and Adalyn Dean (2) will miss his love, support, and affection. There was not a day that went by that they questioned his love for them. They sang with him, laughed with him, danced with him, cooked with him, and worked with him. Michael gave them the absolute best of himself and they will forever know how much they were loved. Michael survived not only his wife and children, but his mother Kathy Olmsted, his father Michael Dean Sr. (Patty Graszl), his brother Sean (Ashley) Dean, his 3 sisters Melissa Dean, Stacie (Chris) Conrad, Stephanie Dean, his step brothers Gary and Rhett Miller, his mother-in-law Ann Kiper (Steve Hummell), father-in-law William (Diane) Kiper, and his sister-in-law Holly (Dan) Hesse and many nieces and nephews. Each relationship was cherished by him. Michael coached at SPBA and gave part of his heart and life to the boys on the field. He set the example of how important it is to have fun and smile. He instilled lessons and changed many lives, helping everyone he could. Michael engulfed his people with his love. He will be missed. Forever & Always “Hope”

Michael Dennis Dean Jr. March 29th, 1986- May 15th, 2021. On May 15, 2021, the world lost a piece of itself as Michael Dennis Dean Jr gained his wings. Michael was many things to many people but his favorite titles were Father, Husband, Son,... View Obituary & Service Information

The family of Michael Dean Jr. created this Life Tributes page to make it easy to share your memories.

Send flowers to the Dean family.