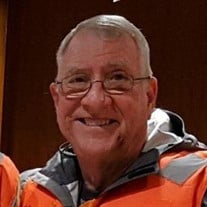 Michael ("Mike") John Balthazor, 77, of Kennesaw, Georgia, died to this life on March 21, 2020. Mike was a devoted husband, father, grandfather, brother, and friend. Born in Baraboo, WI, on March 27, 1942, he graduated from the University of Wisconsin in 1964, and also obtained an M.B.A. from Western Michigan University in 1970. Mike joined the Army Reserves in 1964 and served for six years. Mike met his future wife, Susie, in the summer of 1964 while working at Wisconsin Dells, and the two were married on June 5, 1965. Also in 1965, Mike started working for Union "76" Oil Company, which gave him the "opportunity" to move around the country. This career took Mike and his family to Los Angeles, CA, where he lived close to his sister Pat, and where he enjoyed camping and riding motorcycles in the mountains and deserts. But soon opportunity knocked in Manning, SC, and Mike took the brave step and moved his family across the country. The move couldn't have turned out better. Mike embarked on a fulfilling career managing and owning truck stops in North and South Carolina for many years, but more importantly, Mike made life-long friends in Manning and Columbia. Mike retired at age 68 from a job in sales. Mike started riding Harley-Davidson motorcycles with a close-knit group at the age of 60, and as soon as he retired, Mike took off on a cross-country motorcycle trip, which was one of many extended motorcycle trips. Mike and Susie were able to enjoy each other's company and travel in the last 10 years to many parts of world, but two of Mike's most favorite trips were with his children and grandchildren to Costa Rica and Wyoming. Mike also cherished his time with family and friends at Lake Wateree and Isle of Palms. Recently Mike took particular joy in helping with his grandkids in Kennesaw. Mike is survived by his wife, Susie; son Pete (Elizabeth) Balthazor; daughter Janie (Chris) Griffeth; grandchildren Brinson and Tillman Griffeth, and Michael Balthazor; and sister Pat (Gene) Melvin. Based on the extraordinary circumstances currently surrounding the public health crisis, a celebration of life service will be scheduled and announced at a later date. In lieu of flowers, memorials can be made to churches that have been very important in the lives of Mike's family: Manning United Methodist Church (Manning, SC), Spring Valley Presbyterian Church (Columbia, SC), Eastminster Presbyterian Church (Columbia, SC), and Marietta First United Methodist Church (Marietta, GA).

Michael ("Mike") John Balthazor, 77, of Kennesaw, Georgia, died to this life on March 21, 2020. Mike was a devoted husband, father, grandfather, brother, and friend. Born in Baraboo, WI, on March 27, 1942, he graduated from the University... View Obituary & Service Information

The family of Michael Balthazor created this Life Tributes page to make it easy to share your memories.

Send flowers to the Balthazor family.