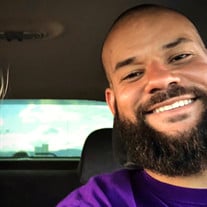 Michael was called home February 12, 2021 at the age of 29 in Denver, Colorado. Funeral Services will be held at 3:00 pm on Sunday, February 28, 2021 at West Cobb Funeral Home and Crematory in Marietta. The family will receive friends from 1:00 pm until 3:00 pm prior to the service at the funeral home. Michael was born on February 28th 1991 to beloved parents Tara King and Dimitri Avin in Manchester, New Hampshire. Michael is survived by his children Aubree and Atlas Avin, his parents Tara King, Dimitri Avin and Rachelle Pierre, his Sisters Janay Arnold, Alexandra Avin, Amanda Avin, Sarah Simmons and Bianca Avin From the very beginning Michael was a strong-willed child which kept those around him on their toes.As a young child Michael would spend summers in Haiti with his Grandparents, and attended Kindergarten at Ti Malice. Michael grew up in Marietta, Ga where he attended school and later enlisted into the Army in 2010, where he was stationed in Fort Hood, Texas. He later relocated to a base in New York to assist in training other soldiers. Michael lived life to the fullest and wasn't afraid to take risks. He enjoyed Traveling and learning about different cultures and beliefs, Michael would often travel to Haiti with his Father because of how much he Loved and took pride in his own Culture. Michael was a hard worker and gave 110 percent when it came to everything he did, he would never say he couldn't do anything, his response was always "I can and Will Learn" The Heart and compassion Michael possessed was unmatched. Shortly after returning Home from the Army, he spent most of his time Helping others from family, friends and even strangers. He took time to meet new people from all walks of life and listen to their stories. Michael embraced learning new things and would light up when sharing stories with Family and Friends about all the Knowledge he'd receive from just a conversation. In March of 2015 Michael became a Father to a beautiful baby girl who he named Aubree and shortly after, Welcomed his amazing son Atlas in 2019 who's name was inspired by Michaels love of traveling. Michael had spent the last few years living in Colorado. He loved to spend mornings on hiking trails and taking his Children to Canyons to explore but most importantly to bond and build memories with them. Michael touched many lives in his short 29 years and he will be greatly missed by all.

Michael was called home February 12, 2021 at the age of 29 in Denver, Colorado. Funeral Services will be held at 3:00 pm on Sunday, February 28, 2021 at West Cobb Funeral Home and Crematory in Marietta. The family will receive friends from... View Obituary & Service Information

The family of Michael Avin created this Life Tributes page to make it easy to share your memories.

Send flowers to the Avin family.