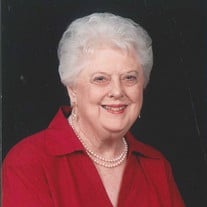 Born August 11, 1931 in Atlanta, Georgia, Martha Jeanette Parker was the daughter of the late William Grady and Pearle O'Sheal Parker. Her grandparents were the late J.D. and Coda O'Sheal and the late Willie and Zollie Parker. After graduating from Brown High School in Atlanta, Martha advanced her education at the University of Georgia where she earned a Bachelor of Fine Arts Degree in 1953 with a major in Piano. She continued graduate work in education at Emory University. From 1955-1990 Martha was employed with the Atlanta Public School System. Her career began at O'Keefe High School where she was a teacher of choral music for 26 years. In 1981, she joined the Administrative Staff of Bass High School. At the closing of Bass High School, she joined the staff of Southside High School. After retirement in 1990, she was retained in the APS for 4 years as a consultant. Her church music career stared earlier as she dedicated her life and talents to the Lord. From 1953-1955, Martha served as the full time Minister of Music at First Baptist Church in Chickamauga, Georgia. During all her years as a full time teacher, Martha also served on the staff of several churches. For 35 years, she was the pianist and Graded Choir Director for Sylvan Hills Baptist Church in Atlanta. Martha actually began her church career there when she was 3 years old and at 15, she was elected church pianist. From 1983-1986, she served Green Acres Baptist Church in Smyrna, GA as bi-vocational Minister of Music and from1986-1994 she served in the same position at Glen Forest Baptist Church in Mableton, GA. In 1994, Martha became a member of the First Baptist Church of Powder Springs, GA, where she served as Coordinator for the Children's Music Ministry. She also enjoyed playing handbells, singing in the adult choir and directing ensembles. Martha always gave thanks to God for allowing her to continue to use her musical talent for His glory. It was her hope and prayer that she made a difference in someone's life and that God was pleased with her offering. Martha loved life and lived it to the fullest enjoying her multitude of friends, gardening, and traveling. Betty, Barbara and Mary were her three childhood friends and the four of them liked to call themselves "The Golden Girls". They were very close and had wonderful times traveling all over the United States. Other friends included musicians with whom many happy hours were spent playing, singing and attending music conferences. Many former students have stayed in touch, thanking her for the difference she made in their lives. Honors include serving as President (1983-87) of The Jubalheirs, the state women's vocal group sponsored by the Georgia Baptist Convention. She joined this group in 1975 and was a faithful member. While attending UGA, Martha was inducted into Sigma Alpha Iota, an honorary music fraternity for women. Also, while at the University, she sang with the Robert Shaw Chorale. She was a member of the Douglas County Retired Teacher's Association and the National Teacher's Association as well the National Association of Professional Women. Words cannot express her appreciation for all the love, prayers and kindness shown to her during the time of illness. Martha left this earth to be at home in heaven on Saturday, May 9, 2020. Survivors include her cousins, Glenda and Bob Bates, Longwood, FL., Janice and Audrey Parker, Camden DE., Marilyn and Cort Massey, Lauren and Allison, Magnolia, DE., Charlie Thomas, Athens, GA., Sonja Smith, Mesa,AZ., Lori and Steve Harris, Matt and Mallory, Dahlonega, GA., Terri and Gary Boatwright and Heather, Douglasville, GA., Brenda and Paul Youngblood, Bloomington Springs, TN., Tiffany and Bart Youngblood and Logan, VA., Daniel and Mendy Youngblood, Nashville, TN., Lisa and Greg Hanson, Gainesville, GA., Aileen and Ed Gocek and family, Land O'Lakes, FL., and Al Fulbright, Culloka, TN. A host of very close Friends: Betty Marshall Andrews, Barbara Wallace Aiken, Mary Young Lane: (Deceased) Robbie, Pete, Jennifer and Isabella Striplin: Catherine and Michael Giel: LuAnn Bryant: Katrena and Jimmy Cuaves, Marlee, Mason and Maddox: Tena Toft: Aaron, Molly and Emmalyn Toft: Laura and Tim Lavoie: Ronnie and Kaye Young and family: and a large church family. In lieu of flowers, donations may be made to the Jubalheirs' mission projects. Music and Worship Ministries, 6045 Sugarloaf Parkway, Duluth, GA 30097-4092 There will be a private graveside service at Westview Cemetery, Tuesday, May 12, 2020. A Celebration of Life will be held at a later date. An online guestbook is available at www.westcobbfuneralhome.com.

Born August 11, 1931 in Atlanta, Georgia, Martha Jeanette Parker was the daughter of the late William Grady and Pearle O'Sheal Parker. Her grandparents were the late J.D. and Coda O'Sheal and the late Willie and Zollie Parker. After graduating... View Obituary & Service Information

The family of Martha J. Parker created this Life Tributes page to make it easy to share your memories.

Send flowers to the Parker family.