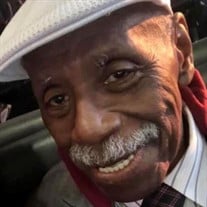 The Life of Marshall V. Lott, Jr. Marshall Vincent Lott Jr. was born November 10, 1929 to the late Marshall and Rosabelle (Sadler) Lott, Sr. On Thursday, September 17, 2020, God called him to rest and reward. Marshall was educated in the Philadelphia school system and attended West Philadelphia High school. He accepted Jesus Christ at an early age and was a member of the Mt. Carmel Baptist Church until his homegoing. In 1946, Marshall married his teenage sweetheart, Mary Katherine Richards. To this marriage were born two daughters, and three sons: Gail, Rebecca, Marshall III, Stephen, and Robert. Marshall and Mary were married for 65 years. Before she went home to be with the Lord in 2012 Marshall tenderly cared for Mary during her long battle with Alzheimer's, often stating, "I get to do this!" He was a devoted family man, working for about 15 years as a top – notch short- order cook at Horn and Hardart. Marshall then, at the encouragement of his wife, decided to take the test to become a Philadelphia Police Officer. As an officer, Marshall became a valuable member of the Police and Fireman's Band, playing his saxophone in yet another venue for 20 years. "Dizzy," as he was known in his youth, expressed an early interest in the saxophone and mastered it as a teen. He went on to play other instruments as well, but the sax, has always been his first love. Marshall also headed his own band, Marshall Lott and Friends in the late 90s. Marshall was a loving and devoted father, grandfather, and great-grandfather, brother-in-law, and uncle. He leaves to cherish his memory, his five children: Gail A. Johnson, Rebecca E. Davis (William), Marshall V. Lott III (Patricia), Stephen E. Lott (Lois), and Robert C. Lott (Cerila); his sister – in- law, Thelma Richards, and a host of grandchildren, great grandchildren, nephews, nieces, and dear friends. In lieu of flowers, donations can be made to the Alzheimer's Foundation in remembrance of Mary K Lott.

The Life of Marshall V. Lott, Jr. Marshall Vincent Lott Jr. was born November 10, 1929 to the late Marshall and Rosabelle (Sadler) Lott, Sr. On Thursday, September 17, 2020, God called him to rest and reward. Marshall was educated in the Philadelphia... View Obituary & Service Information

The family of Marshall Vincent Lott created this Life Tributes page to make it easy to share your memories.

Send flowers to the Lott family.