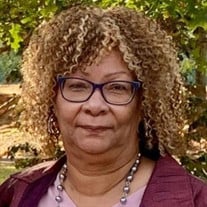 Marquita Joanna Tyner, age 65, of Douglasville, Georgia, passed away Monday, August 31, 2020. Marquita was born on January 10, 1955, in Fort Benning, Georgia, to Anna and Romell Tyner Jr. She grew up in Detroit, Michigan, and eventually joined the United States Air Force. Marquita served for four years before settling in Alaska post-military. She eventually relocated to Georgia to raise her daughters and start her next chapter. During her life, Marquita displayed an incredible amount of strength and was a role model to many. She worked hard as an administrator for the Cobb County Community Services, but she also enjoyed traveling, arts and crafts, and learning the latest technologies. Her sense of humor was infectious, and her ability to speak her mind was respected. Marquita was a real force to be reckoned with. She is preceded in death by her mother, Anna Tyner; and brothers, Aaron Tyner and Robert Tyner. Survivors include her twin daughters, Ashia Walker and Danika Walker; father, Romell Tyner, Jr.; four siblings, Romell Tyner III, Terry Tyner, Jade Tyner, and Adrienne Tyner; and several nieces, nephews, cousins, and beloved friends. Friends and family are invited to attend funeral services on Sunday, September 6, 2020, from 12:00 pm until 2:00 pm at West Cobb Funeral Home and Crematory in Marietta. Online guest book at www.westcobbfuneralhome.com .

The family of Marquita Joanna Tyner created this Life Tributes page to make it easy to share your memories.

Send flowers to the Tyner family.