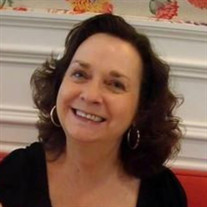 Marian West Taylor, 76, of Marietta, GA, passed away on October 2, 2020 following a battle with Alzheimer's disease. Marian was born in Elizabethton, TN, on December 3, 1943 to Raymond and Mary Helen West, who preceded her in death. She attended high school in Elizabethton, TN, and received an associate degree from Steed College in Johnson City, TN. During her career, Marian worked as a secretary for various offices in East Tennessee and Georgia. She loved singing and dancing to Elvis, listening to music, bird watching, and never left the house without her hair done just right. She loved spending many summer vacations at the beach, especially with her granddaughters. Marian was devoted to her family and was a loving mother and grandmother. Marian is survived by one daughter, Kellie True Brewer (Alan) of Kennesaw, GA, two granddaughters, Samantha True of Chambersburg, PA, and Lindsey True Magnicheri (Phillip) of Acworth, GA, and ex-husband, Richard Taylor of Marietta, GA. She is also survived by siblings Carolyn Colbaugh (Ted) of Elizabethton, TN, Elaine Ruck (Hendrick) also of Elizabethton, Katherine Easton (Jerry) of Tallahassee, FL, and Kenneth West of Johnson City, TN. Marian's family extends their sincere gratitude and thanks to the Tabitha's Retreat Personal Care Home in Powder Springs, GA, and Homestead Hospice for the wonderful care they provided. Services will be held at West Cobb Funeral Home in Marietta, GA, on Friday, October 9. Visitation is at 3:00 pm and the service at 4:30 pm. A graveside service will be held at Happy Valley Cemetery in Elizabethton, TN, on Saturday, October 10 at 3pm. In lieu of flowers, memorial donations may be given to Due West United Methodist Church, Dementia Ministry, 3956 Due West Road, Marietta, GA 30064. Online guest book at www.westcobbfuneralhome.com.

Marian West Taylor, 76, of Marietta, GA, passed away on October 2, 2020 following a battle with Alzheimer's disease. Marian was born in Elizabethton, TN, on December 3, 1943 to Raymond and Mary Helen West, who preceded her in death. She attended... View Obituary & Service Information

The family of Marian Taylor created this Life Tributes page to make it easy to share your memories.

Marian West Taylor, 76, of Marietta, GA, passed away on October...