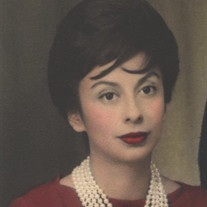 Maria Elena Carlson, age 95, of Marietta, Georgia, peacefully passed away on February 8, 2022. She was born in Ecuador on May 16,1926 to Juan S. and Maria M. Cabezas. Shortly after her birth, her father was appointed the Ecuadorian consul to Costa Rica and the family moved to San Jose, Costa Rica. In 1944, Maria Elena left San Jose to attend Temple University in Philadelphia. There, she served as president of the Latin-American Society and in 1948, graduated with honors with a degree in business. She then returned to Costa Rica where she met John F. Carlson at a community dance. Upon completion of his WWII Army Air Corps service, John traveled to San Jose at the advice of a Costa Rican friend and was attending the University of Costa Rica. Maria Elena and John were married in 1949 in California and had three children. They lived in Southern California where she taught High School Spanish for 20 plus years. Her beloved husband passed away in 2015. In 2017, Maria Elena moved to Marietta. Maria Elena was a lovely person who was adored by family, friends and former students. She was a loving wife, sister and mother as well as a precious "Grammy" to her 7 grandchildren. She loved traveling and especially loved sharing her Costa Rican culture, taking numerous trips there with her children and grandchildren and preparing many delicious "comidas típicas". Maria Elena is survived by her brother, Dr. Carlos Cabezas of San Jose, Costa Rica; her children: Dr. Steven Carlson and his wife, Janet Carlson of San Luis Obispo, CA; John Carlson and his wife, Peggy Carlson of Marietta, GA; Son-in-law, Mike Hoffman of Laguna Woods, CA; her 7 grandchildren and her 2 great-grandchildren. She was preceded in death by her husband John F. Carlson; her father, Juan S. Cabezas; her mother, Maria M. Cabezas; her brother Luis Cabezas; and her daughter, Sandra Hoffman. Maria Elena will be greatly missed and dearly remembered. A Visitation will be held in her honor at West Cobb Funeral Home on February 26th from 4:00-6:00pm.

Maria Elena Carlson, age 95, of Marietta, Georgia, peacefully passed away on February 8, 2022. She was born in Ecuador on May 16,1926 to Juan S. and Maria M. Cabezas. Shortly after her birth, her father was appointed the Ecuadorian consul to... View Obituary & Service Information

The family of Maria Carlson created this Life Tributes page to make it easy to share your memories.

Send flowers to the Carlson family.