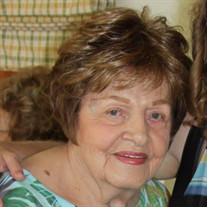 Margaret Elaine Willis, 89, of Chamblee, Georgia, passed away peacefully in the early morning hours on Sunday, December 20, 2020. Margaret was born on August 13, 1931 to Robert J. McCartney and Irene Crampton of Spokane, Washington. She met her life's soulmate, John B. Willis, at a farmers Grange dance in Spokane. They were married for over 64 years during which they raised three boys and moved frequently, eventually settling in the Atlanta, Georgia area. Margaret always had a zest for learning and was not afraid to try something new. At the age of 48, she decided to go back to school and enrolled in a degree program at DeKalb Community College. After finishing her first year of study in 1980 in computer operations and computer programming, she went to work at Lanier Worldwide as a computer operator. She retired from Lanier in 2008 as a Senior Computer Systems Analyst after a 28 year career. For many years afterwards, her expertise in computer systems was called upon as a consultant for Lanier. An avid doll collector, Margaret began collecting dolls in 1986 after acquiring an antique, well-loved and well-worn doll that had belonged to her grandmother. While learning about the doll and having her restored to her original finery, she began attending local doll shows and doll shops. Her collection grew to fill a room and she enjoyed sharing her love of dolls with her two granddaughters and with the community. She also loved gardening and needlework and she taught herself digital photography. She sewed many beautiful dresses and doll clothes for her granddaughters - a special delight after three boys - and volunteered with the Sew-and-Sews group at Living Grace Lutheran Church in Tucker. Margaret's love for family ran deep, first for her husband, then for her three boys and her daughter-in-law, and finally for her two granddaughters. Most recently, she delighted in the arrival of her great-granddaughter. Margaret is survived by her husband, John, two sons, Michael John Willis (Judy) of Powder Springs, GA and Kip Jay Willis of Atlanta, GA, two granddaughters, Katherine Willis Safon (Kévin) of Colombes, France and Lauren Willis Murphy (Ryan) of Roswell, GA, and one great-granddaughter, Navie Margaret Anne Safon of Colombes, France. She is predeceased by her son, Robert Willis of Providence, RI, her parents, Robert J. and Irene McCartney, and two brothers, Robert "Bob" McCartney and Charles "Chuck" McCartney. A private memorial service will be held at a later date. In lieu of flowers, the family requests that donations be made to a memorial fund in Margaret's name at Lutheran Church of the Nativity, 2450 Clay Road, Austell, GA 30106. (Checks should be written to Lutheran Church of the Nativity - please note "Margaret Willis Memorial" in the memo).

The family of Margaret Willis created this Life Tributes page to make it easy to share your memories.

Send flowers to the Willis family.