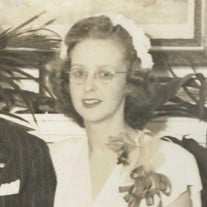 Margaret Griffith Johnson, aged 94, of Kennesaw, Georgia passed away April 10,2022. Funeral Service will be at 11:00 am on Friday, April 15, 2022 at West Cobb Funeral Home and Crematory Chapel in Marietta, Ga. Interment will follow at College Park Cemetery in Atlanta, Georgia. Margaret was born on October 18, 1927 in Dallas, TX. to Georgia Long and George Milton Griffith. She had one sister, Sara Jean, and three brothers, Lewis, Jack and Little George. Her father was an electrical engineer who traveled with Margaret and family to South America in the 1920's and 30's that included Venezuela, Brazil and Cuba. The Griffith family came to Atlanta in the 1940's and Margaret spent the last 70 plus years in the Atlanta area with her late husband, Calvin Edgar Johnson Sr., and their two children, Calvin and Linda. She lived in East Point for 18 years before moving to Riverdale then Kennesaw, Ga. Margaret was instrumental in forming chapters of such organizations as the D.A.R and U.D.C. She was a loving mother and wife and an inspiration to all that knew her. Her love of Jesus, family, her country, and southern heritage were the most important things in her life! .Heaven has a new angel called Mom! Survivors included, son, Calvin E Johnson, Jr., daughter, Linda Johnson Burgess (Phillip), grandson, Sean Phillip Burgess (Rebecca) Durham, NC, nephews: Robert Griffith (Angie)of Idaho Falls ,Idaho, George Griffith (Virginia) of St. Simons Island, GA., nieces: Janet and Jaqueline Griffith of Hampton, GA. The family will receive friends on Friday, April 15, 2022 from 9:00am to 11:00 am at the West Cobb Funeral Home and Crematory in Marietta, Ga. Online guest book at www.westcobbfuneralhome.com.

Margaret Griffith Johnson, aged 94, of Kennesaw, Georgia passed away April 10,2022. Funeral Service will be at 11:00 am on Friday, April 15, 2022 at West Cobb Funeral Home and Crematory Chapel in Marietta, Ga. Interment will follow at College... View Obituary & Service Information

The family of Margaret Johnson created this Life Tributes page to make it easy to share your memories.

Send flowers to the Johnson family.