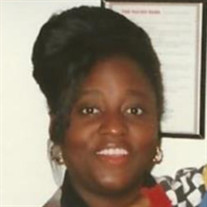 Marcia Nicole Andrews-Corlette, age 57, ascended this earth to her heavenly home on February 23, 2022. Funeral Services will be held at 3:00 pm on Saturday, March 12, 2022 at West Cobb Funeral Home and Crematory in Marietta.The family will receive friends on Saturday, March 12, 2022 from 1:00 pm until 3:00 pm at the funeral home. Marcia was born on November 8, 1964, in Georgetown, Guyana. At the age of six, Marcia relocated to New York City with her two brothers (Steve and Warren Andrews), sister (Candace Andrews) and maternal grandmother (Mavis Forrester) to join her father and mother (Carl and Jessie Andrews) who migrated to the United States several years prior, to provide opportunity and a better way of life for their family. In 1986, Marcia graduated Baruch College with a Bachelor of Science Degree in Political Science. She then worked as an office manager for a legal services provider in New York City and subsequently started a legal services business in 1992 with her mother. Between graduating college and starting a business, Marcia met and married her husband Gregory Corlette and had two wonderful children, Marcus and Phylicia. In 2001, Marcia became an educator in the New York City School System. She then went on to further her education and subsequently received a Masters Degree in K thru 12 Education and another Masters Degree in K thru 12 Special Education. With a pioneering spirit, Marcia and her immediate family relocated to Marietta, Georgia in 2004 where she taught at Campbell Middle School. After relocating to Georgia, Marcia was joined by her parents, and her sister, brother and other family members who now call Georgia home. Marcia was educated and an educator; she had the gift of gab; she loved to travel; she was a people person and loved everyone dearly. Marcia was preceded in death by her parents and father-in-law (Compton), and is survived by her husband, children, brothers, sister, and scores of nieces, nephews, aunts, uncles, cousins and close friends.

Marcia Nicole Andrews-Corlette, age 57, ascended this earth to her heavenly home on February 23, 2022. Funeral Services will be held at 3:00 pm on Saturday, March 12, 2022 at West Cobb Funeral Home and Crematory in Marietta.The family will receive... View Obituary & Service Information

The family of Marcia Andrews Corlette created this Life Tributes page to make it easy to share your memories.

Send flowers to the Corlette family.