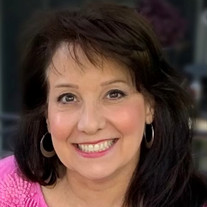 Lynn Ryan O'Meara, 55, of Atlanta, Georgia passed away on Tuesday, September 28, 2021 from a short battle with colon cancer. She was born on May 13, 1966 in Augusta, Georgia, the daughter of Patrick and Sally O'Meara. Lynn was a beautiful, generous, fun loving and compassionate person who could brighten up any room. Known to her family and early friends as Lynn, she was born into a military family and moved multiple times during her childhood. She attended schools in Germany, Virginia and Kansas, graduating from Kansas State University in 1988 with a BS Degree in Business Administration. She began her 32-year career with Delta Airlines on the ground floor answering phones. Encouraged to create an alias name while on the phone, she chose Ryan, the name she went by for the rest of her life. Ryan quickly moved up the ranks at Delta Airlines achieving the level of Director in the Internal Communications Department. After a hiatus to care for her father, she decided life was too short to sit in an office all day. Therefore, she became a flight attendant. The chaos and unpredictability of this role was perfect for Ryan. It enabled her to see the world, meet and help many people, while providing an outlet for her over the top personality and secret desire to be an entertainer. During her life, she helped raise two children; a role she loved dearly, and certainly made a positive impact on them. More recently she met Jim and thoroughly enjoyed being part of his family, planning for their future together. In the last ten years, Ryan enjoyed being an active member of the Kiwanis Club of Marietta, GA as an active participant on the Sports and Social Committee and co-chairing the International Committee with her dear friend, Adriane Larson. She was preceded in death by her father, Patrick O'Meara and dear friend, Patricia Hamilton. Lynn Ryan is survived by her loving mother, Sally O'Meara; her sister Karen O'Meara-Byers (husband Jerry); sister Janet O'Meara; brother Michael O'Meara (wife Wendy); niece Katherine O'Meara; nephew Christopher O'Meara; along with her fiancé Jim Galvin, his children, Sarah and Thomas (husband Mason Jordan) and many dear friends. She will be deeply missed by all who knew and loved her. Visitation will be from 5:00-7:00 pm on Friday, October 15th at West Cobb Funeral Home and Crematory, 3480 Macland Road, Marietta, GA 30064 Funeral Services will be at 11:00 am on Saturday, October 16th at West Cobb Funeral Home and Crematory. Interment will immediately follow at Barber Cemetery (also known as Mableton Memorial Gardens Cemetery), Church Street, Mableton, GA 30126. A Celebration of Life will be held from 3:00-5:00 pm on Sunday, October 17th at The Strand, 117 N. Park Square NE, Marietta, GA 30060

Lynn Ryan O'Meara, 55, of Atlanta, Georgia passed away on Tuesday, September 28, 2021 from a short battle with colon cancer. She was born on May 13, 1966 in Augusta, Georgia, the daughter of Patrick and Sally O'Meara. Lynn was a beautiful,... View Obituary & Service Information

The family of Lynn Ryan O'Meara created this Life Tributes page to make it easy to share your memories.

Send flowers to the O'Meara family.