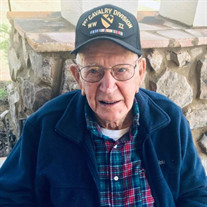 Luther Jackson "Jack" Shields, Jr. age 95, of Hiram, Georgia, formerly of Smyrna, passed away September 2, 2020. Funeral Services will be held at 2:00 pm on Saturday, September 5, 2020 at Floyd Road Baptist Church in Austell with the Rev. Keith Collins officiating. Internment will follow at Kennesaw Memorial Park in Marietta, Georgia. Jack was born in Murray County, Georgia on April 17, 1925 to Luther Jackson Shields, Sr. and Virgie Carver Shields. His family moved to Floyd County, Georgia when he was a year old where lived until he moved to Cobb County, Georgia in 1954. He married the former Vera Watson on March 8, 1947 and she preceded him in death on December 4, 1984. He was then married to the former Frances Mitchell Terry on January 10, 1987; she preceded him in death October 7, 2019. In addition to his parents and wives, Mr. Shields was preceded in death by his 5 sisters and 1 brother. He was a WWII veteran serving in the U.S. Army, 1st Calvary Division from 1945-1946. Proud of his service and his country, Jack participated in several 4th of July and Veteran's Day parades in the City of Marietta. He was employed from 1951 to 1987 by Lockheed Aircraft In Marietta, Georgia. He was a member of Floyd Road Baptist Church where he served as a deacon and in other capacities. Jack loved God, his family and his country. His hobbies included keeping his yard immaculate and woodworking when the weather was too bad to be outside. Survivors include: daughter: Cindy (Bill) Edmondson of Powder Springs, GA; son: Jack (Terry) Shields of Cartersville, GA; stepson: Steve (Sonia) Terry of Rome, GA; five grandchildren: Thomas Edmondson, Tiffany (Matt) Cofer, Mitch (Katie) Terry, CJ (Kristina) Shields and Tara Shields; nine great-grandchildren: Kalie Cofer, Tessa Hollingsworth, Riley Edmondson, Davis Edmondson, Karson Cofer, Carter Terry, Micah Terry, Kimber Shields and Lydia Terry. The family will receive friends on Friday, September 4, 2020, from 5:00 pm until 7:00 pm at West Cobb Funeral Home and Crematory in Marietta, GA and he will lie in-state Saturday, September 5, 2020 from 1:00 pm until 2:00 pm at Floyd Road Baptist Church, Austell, GA. Contributions may be made in Jack Shields memory to the Calvary Children's Home at Calvarykids.org.

The family of Luther "Jack" Shields, Jr. created this Life Tributes page to make it easy to share your memories.

Send flowers to the Shields family.