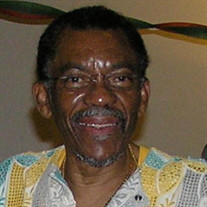 Mr. Linford George Anderson, age 78, of Charlotte, North Carolina passed away on March 16, 2020 at Wellstar Cobb Hospital in Austell, GA. Private services will be held. Linford Anderson was born on July 08, 1941 in Clarendon, Jamaica. Andy Capp, as he was affectionately called by many, grew up in Kingston Jamaica, graduating from Buxton High School in 1959. Andy had an early chance introduction to the Radio, Television, and Recording industry in 1961 when a total stranger encouraged him to apply for a position at the local radio station, Radio Jamaica Reddifusion (RJR). He was hired as a log keeper and was responsible for recording the commercials played and the order in which they were being played. His good fortune continued when a second position presented at RJR for an Audio Engineer. Andy applied and was able to complete a required three month training course in less than three weeks. Andy's talent was immediately recognized as he went on to receive five Production Awards at RJR for Special Radio Programs over a three year span (1961-1963). His radio broadcasting career at RJR was interrupted by his desire to venture into music recording. Andy’s transition to recording studio engineering was aided by Byron Lee of the Dragonaire's Group. Byron Lee hired Andy as his Chief Recording Engineer at West Indies Records Label in 1963. Andy was instrumental in creating the new Rock Steady and Ska sounds that emanated from Jamaica during those years from 1963 through 1970. Andy went on to record accomplished artists to include Bob Marley, Eric Clapton, Roberta Flack, Jimmy Cliff, Peter Tosh, Derrick Harriott, and Prince Buster, to name a few. He received special recognition for his work recording Roberta Flack's “Killing Me Softly” in 1966 while honing his craft at Dynamic Sounds Recording Studio. His passion for recording evolved into some playful and creative experimentation that led to the recording of several songs of his own, to include “Pop A Top” and “The Law.” Andy's studio recording ended in 1971 when he returned to RJR to serve as their Chief Broadcast Engineer for the next six years. Andy migrated to the United States in 1977 and lived in Bronx, New York. He drove a taxi cab before he was hired as an Audio Engineer by B. Eichwald & Company to work at the United Nations Headquarters in New York, New York. Andy recorded and broadcasted many world leaders and dignitaries to include former President George H. W. Bush and Bishop Desmond Tutu over his 26 year career as an Audio Engineer at the United Nations Headquarters. Andy retired in June 2004. Andy’s retirement led him to Charlotte, North Carolina where he fulfilled his dream of owning and operating a restaurant and bar establishment appropriately named Pop A Top. His lengthy illness over the past four months led him to Austell, Georgia where he passed away. Mr. Anderson was preceded in death by his mother, Mary Junior (2006); his daughter, Jacqueline Mathison (2007); his brother, Carlton Thomas (2019); his ex-wife, Maudrianna Anderson (2010). Mr. Anderson is survived by his four sons, Everton (Ingrid) Blair of Stone Mountain, GA; Wayne (Ann Marie) Anderson of Rochelle Park, NJ; Rohan (Karen) Anderson of Kennesaw, GA; Brian (Barbara) Anderson of Fairless Hills, PA; four brothers, Herbert Thomas of Ohio; Ransford Thomas, Anthony Thomas, and Samuel Thomas, of Jamaica; thirteen grandchildren; eight great grandchildren, and a number of nieces and nephews. In lieu of flowers, the family requests donations be made to Hospitality House of Charlotte www.hhocharlotte.org

The family of Linford Anderson created this Life Tributes page to make it easy to share your memories.

Send flowers to the Anderson family.