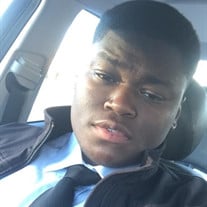 Lincoln Leroy Chibuzor Okpambor was born to Henrietta Okpambor and Christian Okpambor on January 21, 1994 in Marietta, Ga. Lincoln’s life was temporarily interrupted by the enemy death on Thursday, November 26, 2020. Lincoln was preceded in death by his father Christian Okpambor. He leaves behind his mother, Henrietta Okpambor, two younger siblings, Britney and Ndubuisi Okpambor as well as his uncles, aunts and cousins. Lincoln attended two private boarding schools in Nigeria: Christland College in Idimu and Infant Jesus Academy in Asaba. While in Nigeria, Jehovah’s Witnesses would regularly call on the family but Lincoln did not want them to study with his family because of a misconception he heard at school that the witnesses were a cult. His mother would regularly take him and his siblings to church but at a point, they became tired of it and would refuse to go. In an effort to make the children go to church with her, she would say, “Well if you don’t go with me, the witnesses will bring the church to the house.” And come they did, leaving behind the Young People Ask and Bible Story books which the children eagerly read. In 2012, he returned to the US to finish his education and graduated from North Paulding High School in 2013. Then in 2014, Lincoln started studying with Jehovah’s Witnesses. He called his mom in Nigeria and said, “These people are really nice,” in contrast to what he heard at school. The truths he was learning touched his heart and he wanted to share these with his siblings. One day, he asked Britney to fill in for him at work and informed her of a sister that came to discuss the Bible with him. He said, “Be polite and talk to her. She’s nice and will answer any questions that you have about the Bible.” That started the spiritual journey for the family. With each visit he encouraged Britney to continue to study until she got baptized in 2018. When Ndubuisi returned to the US in 2016, he went to work at the family business. There, he too would study the bible until he made the truth his own and got baptized in 2019. His mother was also encouraged to visit the Kingdom Hall and soon enough she too started studying and got baptized in 2018. In 2014 Lincoln went to ATP Flight school and obtained his commercial pilot license but he put it aside temporarily to focus on the family business in 2016 and then went on to obtain his insurance license in 2018. With lots of ambition and a goal in mind, Lincoln started making plans to strengthen and build up his family after the passing of their father earlier this year. He loved his family but most importantly he loved Jehovah. True to Hebrews 6:10, Jehovah is not unrighteous to forget all the work Lincoln has done for His name. We are sure he is safe in Jehovah’s limitless memory and we look forward to welcoming him again in the new system. Lincoln’s memorial service will be on December 5th and his burial will be on December 12th.

The family of Lincoln Okpambor created this Life Tributes page to make it easy to share your memories.