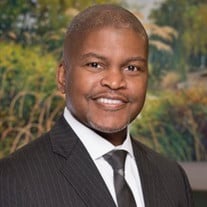 A Celebration of Life LeVoyd L. Carter, II May 11, 1970 - November 12, 2021 West Cobb Funeral Home 2480 Macland Rd SW Marietta, GA 30064 LeVoyd L. Carter, II, 51, of Atlanta, Georgia, gained his wings while surrounded by loved ones on November 12, 2021. LeVoyd was born on May 11, 1970 in Cleveland, Ohio to Ruby and LeVoyd Carter, Sr. After moving to Georgia and graduating from North Clayton High School in 1988, LeVoyd attended Morehouse College and Georgia State University (GSU). While at GSU LeVoyd was Vice President of the Black Student Alliance, and a leader and negotiator during the 1992 student protest and sit-ins that led to the creation of GSU’s African American Studies Department. LeVoyd also went on to become elected Student Government Association President at GSU. After receiving his undergraduate degree in 1994, LeVoyd attended law school at the University of Florida where he also served as President of the Black Law Student Association and Vice Justice of Phi Alpha Delta, before receiving his Juris Doctorate in 1997. LeVoyd began his legal career in the Mayor’s Office of Telecommunications at the City of Atlanta. He later worked at Comcast before landing at Cox Communications (Cox) where he held a series of legal and leadership roles. Over his 17 years at Cox LeVoyd was proud to serve as Associate General Counsel in Cox’s Law & Policy Department. And dedicated to both his work and colleagues across Government and Regulatory Affairs, and Diversity & Inclusion. In 2013 a friend-turned-amateur matchmaker introduced LeVoyd to Sherry Ann Kangalee and both were smitten. The couple quickly fell in love and LeVoyd loved and cared deeply for Anthony & Anisa (“Lil Bit”) as well. In 2015, LeVoyd and Sherry were both blessed in marrying the love of their lives, finding their true soulmates, and spending their time together as best friends who simply adored one another. LeVoyd never missed an opportunity to demonstrate his love and dedication to Sherry….He lived for her, and she for him. LeVoyd, a true man of integrity and humility, was a devoted husband, father, and son that truly enjoyed spending quality time with family and close friends. LeVoyd’s many passions included deep intellectual conversations; curling up with a good book; dancing with his mom, Ms. Ruby; taking breathtaking photos during his extensive global travels; and admiring, acquiring, and creating his own great art pieces. Yes, LeVoyd even painted! True to form, LeVoyd had already begun penning his own autobiography and his devoted wife, Sherry, intends on finishing that work in honor of his memory. Brotherhood, Education, and Service were at the forefront throughout LeVoyd’s life. Like his father he was a Mason, and in addition to being a Charter Founder of Black Ice Lodge #720 he served as Deputy Grandmaster of the Sons of St. John Grand Lodge. LeVoyd was also a Life Member of Kappa Alpha Psi Fraternity, Inc., a true and noble Kappa Man, now being greeted by his brothers into Chapter Invisible. LeVoyd is predeceased by his father, LeVoyd L. Carter Sr.; his maternal grandparents, Alexander and Saddie Bell Allison; and his paternal grandparents, Joseph and Dorothy Carter. LeVoyd is survived by his wife, Sherry Ann Kangalee-Carter; his children, Anthony & Anisa (Lil Bit); his mother, Ruby Lee Allison Carter; his sister, Lavonna Lyvett Carter; his niece, Iyyana Monique Usher; and a host of loving family and friends. The Carter Family would like to express their gratitude for the many expressions of love during this difficult time. Arrangements entrusted to West Cobb Funeral Home & Crematory. Westcobbfuneralhome.com| 770-419-9234 Family request that everyone please wear a mask. In lieu of flowers, please donate to StandUpToCancer.org at https://standuptocancer.org/

The family of Levoyd L Carter created this Life Tributes page to make it easy to share your memories.

Send flowers to the Carter family.