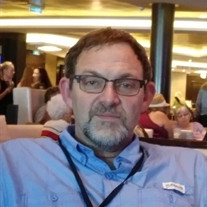 Leonard Andrew Shaw, 58, of Powder Springs, GA suffered a massive heart attack and passed away at Cobb Hospital on Saturday, March 21, 2020. He was born December 22, 1961 in Millersburg, OH to the late Harry and Evelyn Shaw. He married his childhood sweetheart, Tammy Jackson, on January 8, 1983 and moved to Georgia in December 1987. He started work at Sikes Fleet Services in 1987 as a diesel technician, where he worked for the next 33 years. Leonard had a strong love for God, which was shown by his faithfulness and influence on those around him. He was kind, forgiving, and loved unconditionally. Many around him looked to him as an example and although he lived quietly, his life spoke to many. He was a jack-of-all trades, "man with the answers" that everyone called for advice and a helping hand. He loved spending time in the outdoors hunting, camping, and hiking. He enjoyed doing home projects and working in the yard. His greatest joy of all was spending time with his wife, children, and grandchildren. He is survived by his wife, Tammy (Jackson) Shaw, of 37 years who was the love of his life. He leaves behind 2 children Drew Shaw (Jenna Anderson) of Rockmart, GA and Danielle (Jeffrey) Parker of Hiram, GA; 4 grandchildren Sophie and Luke Shaw, Gibson and Fender Anderson all of Rockmart, GA; 5 siblings Raynola (Paul) Little of New Philadelphia, OH; Sarah (Kermit) Welborn of Peachtree City, GA; Phillip (Gale) Shaw of Port Charlotte, FL; Harry Jr. (Nancy) Shaw of Strasburg, OH; Lloyd Shaw (Belinda Lee) of Morgonton, NC; sister-in-law Barbara Shaw of Strasburg, OH; many nieces, nephews, great-nieces, great-nephew, and friends. A private visitation and graveside service will be held at Powder Springs Memorial Park due to the coronavirus restrictions. A Public Celebration of his Life will be announced at a later date.

Leonard Andrew Shaw, 58, of Powder Springs, GA suffered a massive heart attack and passed away at Cobb Hospital on Saturday, March 21, 2020. He was born December 22, 1961 in Millersburg, OH to the late Harry and Evelyn Shaw. He married his... View Obituary & Service Information

The family of Leonard Andrew Shaw created this Life Tributes page to make it easy to share your memories.

Send flowers to the Shaw family.