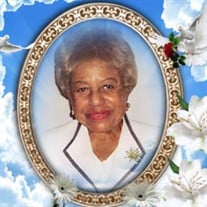 Leomae Ruth Bagley Good, affectionately known as “Lee”, transitioned her life on April 8, 2022, at Cadence Marietta Assisted Living Home, Marietta, GA in the loving arms of our Lord and Savior Jesus Christ. Lee was born and raised in Trenton, NJ on August 18, 1924. She was a graduate of Trenton Central High School and Virginia State University. She also earned additional credits from Columbia, Rider and Rutgers University. After college, Lee was employed as a Social Worker then appointed as the Director of Welfare for the City of Trenton under the administrations of Mayor Arthur J Holland, Mayor Carmen Armenti, and retired under the administration of Mayor Douglas H. Palmer. Leomae, had a lifetime membership with Municipal Welfare Association. Lee was a devoted member of Galilee Baptist Church where she worked under her father and mother, the late Rev Dr. Semuel and First Lady Leomae Bagley for over 55 years. She was the founder of the Nurses Unit at the “Old Galilee“ in 1957. She was also a member of the United Women of Galilee and crowned Queen of Galilee in 1976. Lee was still an active member at Galilee Baptist Church under the pastorship of Rev. Dr. John H. Harris, Jr. until she was no longer able to attend. Leomae was a community activist, along with her husband, the late Harding Deane Good, who was the editor of the Observer, the first African American newspaper of Trenton, NJ. “The Observer” was the Black community’s link to issues that were related to its struggles for equality. Lee worked diligently with the late Dr. Jack Washington as the author of “The Quest for Equality “with this information that was entered in the book of the history of Trenton. On Thursday, May 16, 1963, Mrs. Thelma Robinson, National Association of College Women, Northeast Sectional Director, met with the Central Jersey Branch of the National Association of College Women at the home of Mrs. Leomae Good in Trenton to discuss reasons for dividing the Central Jersey Branch of the organization. The matter was referred to the National Executive Committee for decision. The Trenton Branch was established on September 16, 1963, after authorization by the 1963 National Convention in Chicago. The first officers installed by Mrs. Thelma Robinson, the Northeast Sectional Director, were Leomae Good, President, Frances Balton, Vice President, Rosanna Gibson, Recording Secretary, Barbara Lee, Corresponding Secretary and Anna Eure, Treasurer. Lee was a charter member of the National Association of University Women, President of the Trenton Branch from 1963 to 1968 and was Northeast Sectional Director from 1979 to 1981. She was also a member of Urban League Guild of Metropolitan Trenton, Top Ladies of Distinction, The Trenton League of Women Voters, the Y. W.C. A. Twigs Mothers, the Trenton Branch NAACP and Iota Phi Lambda Sorority. She was recognized by Zeta Phi Beta Sorority as its Women of the Year in 1977, NAUW as Woman of the Year in 1996, and Top Lady of the Year by the Top Lady of Distinction Inc. She achieved many recognitions, awards and accolades that are too many to mention, which included admiration from many friends. In 2002, friends from the Urban League Guild, Ricky Billups, Rachel Brown, Shirley Brown, Hazel Holloway, Flipp Livingston, Marjorie Ellis and Carole Taylor, paid tribute to her. Lee enjoyed reading, traveling, sewing and collecting rocks. She was preceded in death by her husband, Harding Deane Good, her son Rev. Deane Harold Good, parents Rev. Dr. Semuel M. and Leomae Bagley; siblings Harthy (Bunni) Brothers, Semuel (Buddy) Bagley, Vernie M. Ellis, Ezanie (Bill) Wilson Bagley, Orva Z. Nance, Jacquelin E. (Jackie) Bagley, beloved nieces Linda Nance Ball and Terri Lynn Bagley, and nephew Vicente Arthur Donastorg II. Lee leaves to cherish her precious memory and inherit her commitment to God, her church, and her family, her siblings, Rev. Dr. Stanley B. (Ruth) Bagley of Georgia, Janice Bagley Donastorg of Georgia, sister-in-law Deloris Bagley of Lawrence Township, NJ, first cousin Judy White of Lawrenceville, NJ, special niece, Juana Donastorg-Isaac and husband Patrick, of Georgia, and a host of beloved nieces, nephews. Close family friend Ted and Rosalind Plunkett, and other dear friends too many to mention.

The family of Leomae Good created this Life Tributes page to make it easy to share your memories.

Send flowers to the Good family.