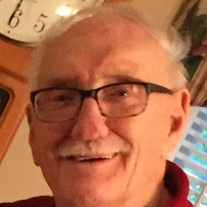 Kenneth Richard Seamons, age 88, of Marietta, Georgia passed away Sunday, August 2, 2020. The family gathered for a private farewell. A memorial service to celebrate Ken's life will be held once public health guidance permits larger gatherings. A native of London, England, Mr. Seamons was a long-time resident of Cobb County. He served in the Royal Air Force before moving his family to Georgia in 1966 to work for Lockheed. He later worked for and retired from Ciba Vision. He was a dedicated and loving husband, father, and grandfather. Ken and his wife Pamela were inseparable. He enjoyed watching his children and grandchildren in the many activities in which they participated and, more recently, visiting with his great grandchildren. Quite the storyteller, he would entertain his children, grandchildren, and great grandchildren with both true accounts and fascinating tales. Among his favorite memories were the times the entire family gathered together for holidays and vacations. Passionate about soccer, he was an avid fan of Chelsea FC and Atlanta United FC. In the 1970s and 80s he coached youth soccer, founding the Dynamos to prepare players for high school, many of whom went on to play in college. He was adored by many and an idol to those who loved him. Mr. Seamons is survived by his wife of 65 years, Pamela Seamons; 2 daughters, Fay (Clay) Morgan, Kennesaw, GA and Gayna (John) Stafford, Marietta, GA, and a son, David (Karin) Seamons, Peachtree Corners, GA; 2 sisters, Lily Thomas, Haverford West, Wales U.K., and Mary Lou Gibson, Kent, England U.K.; 3 grandchildren, Ashleigh (Erik) Conatser, Crofton, MD, Ricky (Stephany) Waters, Johns Creek, GA, and Ally Morgan, Kennesaw, GA; 5 great grandchildren, Adeline Waters, Charlotte Waters, London Waters, Phoenix Conatser, and Beckham Conatser; and many nephews and nieces.

The family of Kenneth R. Seamons created this Life Tributes page to make it easy to share your memories.

Send flowers to the Seamons family.